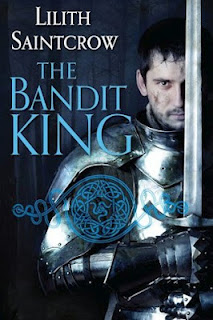 Author: Lillith St. Crow
Series: Romances of Arquitaine # 2
Genres: Fantasy, Romance(ish?), Adult
Publisher: Orbit
Released: 1 June 2012
Summary: via goodreads.com Tristan d'Arcenne is what he always wished to be--Vianne di Rocancheil's Consort. But Vianne is no more a noblewoman, she is the Queen of Arquitaine, faced with treachery, invasion, war, and a Consort whose secrets may well shatter their marriage. For before Tristan was hers, he belonged to a King...and that King died by Tristan's hand.
Arquitaine needs them both. The country is locked in a deadly game whose rules change by the moment. The Queen is an adept player, but hardly ruthless enough. The contest requires a man who has nothing to lose, a man who has already done the worst and will continue to do so for his wife, his country, and his own salvation.
The Bandit King approaches...
My Review: When I reviewed The Hedgewitch Queen I had (obviously) not read the second one. So some of the problems that I had with the first one were redeemed in the second because the slowness I felt in the pacing of the first was really a setting up of sorts for the second. Phew, I hope that made sense, probably not.
Anyways, The Bandit King is told from Tristan’s point of view. Now Tristan was the character that kept me interested in the series so I was pretty excited to read this one purely because it is his point of view. What I wasn’t expecting: How dark and dreadful Tristan’s mind was. I thought all those brooding stares were out of love. Nope. Well, kind of.
And that sums up how I felt about this book. Kind of good about it, but kind of annoyed. I feel like Tristan and Vianne never really get on the same page with each other. They’re always one step behind or ahead of the other. Vianne is cutting Tristan out of everything and does quite a few things without asking for his advice, though in her defense Tristan is kind of a lying dog jerk face meanie. The thing with these books is that I went into them thinking they were a fantasy-heavy light-romance fun kind of read it is not that. The Bandit King is based more on politics, intrigue, magic, and the inner workings of the aforementioned topics. The love story that we were first introduced to takes a complete back burner (if not being completely obliterated altogether).
I felt that this was a good conclusion, and I can’t say I didn’t like hearing from Tristan, he just wasn’t what I expected him to be. Then again, if I think about it, he was exactly what you would expect from a trained assassin and King’s Left Hand. I’m giving it a three because I was satisfied, but I was bummed about the stuff that went down romance-wise.