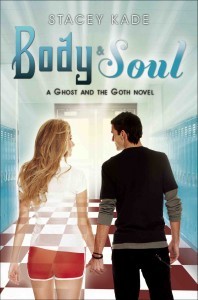 Author: Stacey Kade
Series: The Ghost and the Goth # 3
Genres: Paranormal, Contemporary, Young Adult, Romance
Publisher: Hyperion
Released: 1 May 2012
Summary: The Ghost
I’ve been trapped in the body of Lily “Ally” Turner for a month now. Talk about a fashion crisis on an epic scale. What worries me more, though, is sometimes I catch Will looking at me like he thinks I’m Lily...or that he wishes I were. Without the good looks of my former self, I don’t know who I am, or if who that is is good enough. I need out of this mess. Now. Will and I have been looking for a solution, one that would separate me from Lily without killing her. But it’s not going well. Then, when it seems like things couldn’t get any worse, we run into Misty, my former best friend and boyfriend-stealer extraordinaire, who claims she’s being haunted...by me. Seriously?I’m determined to get to the bottom of who’s pretending to be the spirit of Alona Dare (while I’m pretending to be someone else) and then get the heck out of this body. Or die trying...
The Goth
I’ll admit it. It’s really weird to look at Alona but see Lily. I do know the difference, though, contrary to what Alona might be saying. And Alona is more than a pretty face to me, not that she would believe that. Our one lead for some help in this messed up situation might be a page torn from the yellow pages-—the “Psychics” section-—I found in my dad’s stuff. One of the “fakes” seems a bit more real-—and odd-—than the others. Before I can investigate further, though, Alona is off and chasing a ghost that’s probably nothing more than a figment of Misty’s guilty imagination. Now Lily’s family is freaking out because she didn’t come home, my mom is ordering me to stay out of it, and something is definitely wrong with the person formerly known as Lily “Ally” Turner...
My Review: I thoroughly enjoyed Body and Soul. As the final novel in The Ghost and the Goth trilogy I feel like it definitely lives up to it’s predecessors. The reason I liked this one the most is that I feel like Alona and Will finally begin to figure stuff out. We’ve been waiting peeps, and the day has finally come!
No more beating around the bush, no more “let’s be nice all the time” Alona and Will are finally becoming adults, and acting like they are in an adult relationship! Go Alona and Will! I don’t want to give anything away, and Body and Soul has the potential to be very spoiler-ridden (review wise) so let me just say this: If you liked the first two, Body and Soul is a worthy finale. I’ve loved going on this book journey with Alona and Will. Alona is still her same old smart aleck self, and Will has the patience of a god. But that is why the these two work. It was so much fun to see them enter this new phase of their relationship and try to re-figure each other out. There were still plenty of laughs, and in true Stacey Kade fashion I was holding my breath towards the end. You’ve got your villain, you’ve got your love interest, now go curl up on the couch and read about them like your back in high school ;)