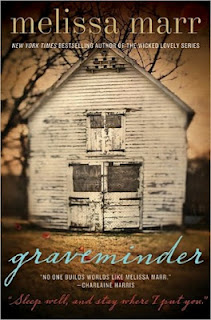 Author: Melissa Marr
Series: Stand Alone (so far)
Genres: Paranormal, Mystery, Fantasy, Adult
Publisher: HarperCollins
Released: 9 May 2011
Summary: via goodreads.com Rebekkah Barrow never forgot the tender attention her grandmother, Maylene, bestowed upon the dead of Claysville. While growing up, Rebekkah watched as Maylene performed the same unusual ritual at every funeral: three sips from a small silver flask followed by the words, "Sleep well, and stay where I put you."
Now Maylene is gone and Bek must return to the hometown—and the man—she abandoned a decade ago, only to discover that Maylene's death was not natural . . . and there was good reason for her odd traditions. In Claysville, the worlds of the living and the dead are dangerously connected—and beneath the town lies a shadowy, lawless land ruled by the enigmatic Charles, aka Mr. D. From this dark place the deceased will return if their graves are not properly minded. And only the Graveminder, a Barrow woman, and the current Undertaker, Byron, can set things to right once the dead begin to walk.
My Review: Let me start off by saying that I enjoy Melissa Marr’s writing voice. And I was glad that her voice in her first adult novel hasn’t changed from that in the Wicked Lovely series. That said, I thoroughly enjoyed Graveminder.
It felt like a great movie. The town of Claysville is so mysterious and Rebekkah and Byron are such a wonderful team. Although the mystery rather unfolded rather slowly to in my opinion, the stuff going on relationally between Byron and Rebekkah makes up for the slow moving mystery seem faster.
Graveminder however, is more about a town and the people in it, and like other of Marr’s stories there are a lot of points of view which at times can make it a little bit hard to follow.
However, I have to say I really love how modern Marr’s relationships are. She doesn’t let her characters get too enamored with each other, but she does let you see the hurt and heartache they feel while trying to move on. Although she definitely has the idea of soul mates concerning Rebekkah and Byron, she also shows that they can handle themselves, or at least attempt to handle themselves on their own, and they both realize how much stronger they are together, which is something that I think makes every great relationship work.
Plot wise things were really tight, so many things can go wrong in paranormal novels, but with this one everything really comes together quite nicely. Marr is able to fit in the story as well as the town that is crucial to the construction of the novel. That Marr is able to do this seemingly effortlessly shows how remarkable of a writer she is.
I enjoyed Rebekkah’s inner monologue during the chapters that were from her point of view, as well as the fact that Marr has managed to encompass an entire town. She tells Graveminder like an incredibly interesting history. Definitely one to read around Halloween time that will give you some chills and leave you wanting to have the lights on. I’m excited to see what she has coming in the future as far as her novels for an older set go.