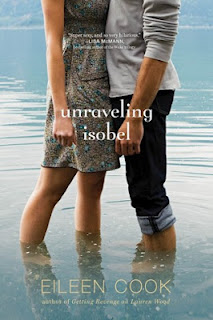 Author: Eileen Cook
Series: Stand Alone
Genres: Paranormal, Contemporary, Romance, Young Adult
Publisher: Simon Pulse
Released: 3 January 2012
Summary: via goodreads.com Isobel’s life is falling apart. Her mom just married some guy she met on the internet only three months before, and is moving them to his sprawling, gothic mansion off the coast of nowhere. Goodbye, best friend. Goodbye, social life. Hello, icky new stepfather, crunchy granola town, and unbelievably good-looking, officially off-limits stepbrother.
But on her first night in her new home, Isobel starts to fear that it isn’t only her life that’s unraveling—her sanity might be giving way too. Because either Isobel is losing her mind, just like her artist father did before her, or she’s seeing ghosts.
Either way, Isobel’s fast on her way to being the talk of the town for all the wrong reasons.
My Review: Unraveling Isobel was such a fun read, and finally a stand alone book that we really well written! I have been so sick of series lately, and this one was such a well done single that I couldn’t help but like it.
First I want to talk about the relationship that Isobel has with her mother. Although it falls into the classic “despondent” mother/daughter relationship that so many ya books fall into, however Cook justifies it by focusing on the “why” of their relationship. I appreciated this so much as a reader, don’t get me wrong: I was still annoyed that her mother blindly followed Dick but at least it wasn’t really out of character for the mother to act that way.
The supernatural aspect of Isobel was a little ambiguous for my taste. It left me with a few questions that I didn’t expect to have after reading a stand alone. I wish that Isobel’s “tendencies” had been a little bit better explained, but nobody’s perfect.
I was very pleased with how the Nate/Isobel thing works out. At first I’ll admit, I was a little bit freaked out. I didn’t want this to go all Twin Peaks on me. However, Cook brings out their relationship really beautifully and with plenty of butterflies. I really enjoyed it.
The mystery aspect, although simple is well thought out. There were definitely some “Nancy Drew” like moments and I enjoyed the psychological aspect of the mystery. Overall it was a good and enticing read that may or may not keep you wanting the light on.