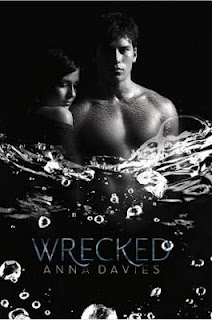 Author: Anna Davies
Series: Stand Alone
Genres: Fantasy, Paranormal, Young Adult, Romance
Publisher: Simon and Schuster Books for Young Readers
Released: 1 May 2012
Summary: via goodreads.com Ever since the death of her parents, Miranda has lived on Whym Island, taking comfort in the local folklore, which claims a mysterious sea witch controls the fate of all on the island and in its surrounding waters. Sometimes it’s just easier to believe things are out of your control. But then a terrible boating accident takes the lives of several of her friends, and Miranda is rescued by a mysterious boy who haunts her dreams. Consumed by guilt from the accident, she finds refuge in late-night swims—and meets Christian, a boy who seems eerily familiar, but who is full of mystery: He won’t tell her where he is from, or why they can only meet at the beach. But Miranda falls for him anyway…and discovers that Christian’s secrets, though meant to protect her, may bring her nothing but harm.     Seductive and compelling, Wrecked brings a contemporary, paranormal twist to a classic enchanting tale
My Review: I’m pretty sure I was supposed to learn something from Wrecked, and that something is that pseudo mermaid tales and I don’t get along. At. All. So basically, this was my final shot and I won’t be reading any more. Don’t get me wrong, Wrecked was a good story. It had it’s moments of severe aggravation amongst characters, but all in all the story was really solid. It held with the same ideas throughout, and the characters didn't go all bi-polar, so that was a bonus. I spent a lot of time feeling sorry for Miranda, but at least it was consistent sorrow. However, what I wasn’t planning on the ending. I won’t spoil it for you, but I will admit I was kind of bummed.
I dislike books that are sad, and Wrecked was a pretty sad book. Interesting because of it’s source material being mermaids and sea creatures, but not one that I would pick up. Like I said, I am officially banning myself from reads that contain anything involving mer-creatures or things from the ocean. Because of this bias, I’m giving it two pie, but normally I would have given it one. It was just so darn sad, I kept having to ask myself why I was reading it. Man, I've got to stop picking up books based purely on the cover art! And no more mer-whatever!