Sammy Keyes and The Hotel Thief 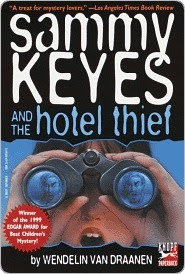 Author: Wendelin Van Draanen
Series: Sammy Keyes # 1
Genres: Mystery, Humor, Middle Grade
Publisher: Knopf Books for Young Readers
Released: 14 April 1988
Summary: courtesy of goodreads.com Grams always told her those binoculars would get her into trouble. Now Sammy's witnessed a crime at the Heavenly Hotel-a light fingered thief stealing $4,000 from Madame Nashira, the astrologer with the fire-hazard hair-do. Thing is, while she was watching him, he was watching her, too...
Fast-paced and funny, packed with menacing suspects and clever clues, the Sammy Keyes mysteries keep you quessing to the last riveting page.
My Review: If you’re looking for a great series for your middle grade reader that is a little bit more modern than The Boxcar Children (which are some of my favorites) and will appeal to both boys and girls, look no further than Sammy Keyes. I cannot recommend this series highly enough!  Like an updated, spunkier version of Nancy Drew, Sammy wins you over on the first page.  She is, by far, one of my most favorite protagonists in the world.  She is so hilarious, fun, and relatable, especially concerning her interactions with the characters in her life.  Sammy is such a little spitfire, I honestly feel like she is a great example for girls, and she is such a strong character personality-wise.  She really chooses to go her own way, and makes that okay.  She suffers from all of the pitfalls of junior high, but magically doesn't really let it get to her.
Although she doesn’t come from the best situation domestically, she still makes the best of it, which is amazing, and empowering, a great message to send out to the junior high masses.  The Hotel Thief isn’t necessarily my favorite Sammy book (they get progressively better) I do feel like it’s the perfect beginning.  You don’t need to start with Book 1 in this series, necessarily; however, if your reader is just starting to read middle grade books (this would put them at about 11-12 years old, I think?) I would suggest beginning with this one.  The novels get longer as the series progresses, making it easier for the reader to grow up with Sammy in a way.  Also, The Hotel Thief is the one in which you get a lot of the background details on Sammy’s life and situation, making the others flow together more easily.  I definitely recommend it.