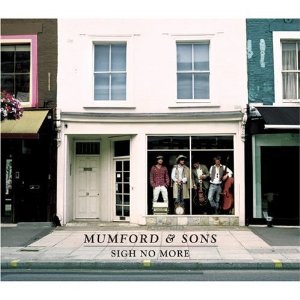 Okay, I won't lie.  If you didn't know that this was coming by now, than you must be crazy.  I have a lot of feelings attached to this album, and this band, which is one of the reasons why I've resisted reviewing it.  There is a fine line between making a review personal and making it professional.  Although this is a blog, and a completely unprofessional outlet, I do try and keep on the professional side with my reviews.  Unfortunately this will most likely veer into the more personal side of things.  I first got wind of Sigh No More in 2009 through Greg James' radio show on BBC Radio 1 that September.
The song was Winter Winds, and I have to admit.  It wasn't really my favorite at first, Greg James had made such a huge deal out of it, and it totally wasn't my kind of thing.  But I kept on listening to his show (I'm a fan) and he kept on playing that song, and finally after listening to it four or five times I understood it.


Do you get it?  It's okay, you can just keep repeating it until you do...

Anyways, I got my hands on a copy of Sigh No More when it came out in the beginning of October that year (I'm not going to tell you how. I guess you could say I have connections) and I honestly have not stopped listening to it since.  They make an appearance on every single mix tape, and it is through them that I have found out about so many incredible other artists like Laura Marling, Johnny Flynn and the Sussex Wit, Daughter, The Staves, Beans on Toast, Marcus Foster, Ben Howard . . . I could go on and on.  I had been listening to quieter folkish stuff (Bon Iver, The Decemberists, etc.) for a while, but Mumford and Sons was really the catalyst into a whole world of British Folk and Roll (there really is no other term for it, because Nu-Folk sounds idiotic and vague).


Seriously, Folk and Roll is, obviously, the better term . . .
P.S. This song is a live recording of a track off their upcoming release Babel on 24th September

This one gets crazy too.  Just have a listen.
Reminds you of The Grapes of Wrath, right?

Sigh No More has some of the most powerful lyrics that I have ever heard.  Not only because they have the backdrop of some incredible tunes (producer Markus Dravs has worked with Arcade Fire and Coldplay) but also because they can mean an array of things.  If you listen, truly listen, to every lyric, every song, you discover something new every time. (At least I do).  If any one asks me for a recommendation on something to listen to, this is always, always the first group that I recommend.  They have impacted in some way everything that I listen to know, whether physically (a lot of what I listen to is coming off of the Communion label which was co-founded by a member of the band) as in, one or more members had a direct hand in putting an artist on their compilation (The Flowerpot Sessions is one of my most favorite compilations of all time) or performing with an artist (too many to name, but the collaborations are incredible).

See what I mean?

I understand that this has totally crossed into gushing territory, so I'm going to wind it down.  Let me just say that as musicians, I feel like what this band has brought to the forefront of the airwaves and iTunes mixes has been incredible.  That they have been able to bring some humanity, wit, charm, and all around intelligence back to the forefront of music is remarkable.  Sheesh, it is because of them that I picked up my first Michael Chabon, John Steinbeck and Cormac McCarthy novels (we were only required to read Shakespeare in school - and a Mark Twain novel. Not joking.)  If you haven't already begun listening to them, do something about it.  I cannot recommend them highly enough.   Plus, they seem pretty nice.


Also, catch them on tour.  I got the opportunity to see them live recently and I am still smiling.  I've been to a lot of concerts, and nothing really matches the sound that they brought with them, their opening acts were totally class, the venue was incredible, and the band.  Well, they were everything that I had hoped they would be, and more.
Posted by E at 6:00 PM