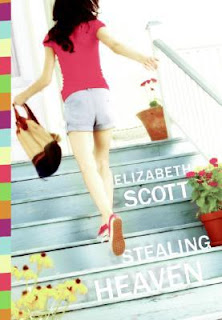 Author: Elizabeth Scott
Series: Stand Alone
Genres: Contemporary, Romance, Young Adult
Publisher: HarperTeen
Released: 27 May 2008
Summary: courtesy of goodreads.com From a stunning new voice in teen fiction comes a tale of a teenage girl who with her mother travels the country as a professional thief. After they arrive in the beach town of Heaven, everything begins to change.
My Review: Elizabeth Scott amazes me because she kind of write whatever she feels like, and doesn’t really care.  Normally authors have a niche that they fit in to, but Scott writes a little bit of everything, and I have to admit, I like some of her books far better than others.
The “some” that I like better are her contemporary YA novels. Novels like Stealing Heaven.  Scott has a gift for creating dysfunctional mother/daughter relationships and Stealing Heaven was no different.  What got to me about this novel though, was the strength of Dani’s voice.  The entire cast of this novel was incredible, but Dani, reading her figure out about her life, figure out who she is, that’s what really struck me as amazing.
Another thing that I enjoyed was the relationship development  between Dani and Greg.  Finally I can say I’ve read a book with a relationship that doesn’t involve a ridiculously overbearing boyfriend who talks down to the girl.  I mean, compared to what else is out there, Greg was dang near perfect.  By acting normal Greg achieves the impossible as a love interest. Sure, in the past you have that, “this character is incredibly sexy” moment, but rarely does a male character make me thing: “dang, this guy has morals.  He’s normal.  He’s nice. And he isn’t mysterious!” Which is ironic, because I think a lot of real guys are like Greg, and the Edward’s and Patch’s of literature kind of ruined their street-cred.
The plot for Stealing Heaven moves effortlessly forward, like a lot of Scott’s novels.  I read it in a few hours.  This novel doesn’t bring anything outstandingly new or ground breaking to YA fiction, but it’s good YA fiction. (Which I guess makes it a little bit groundbreaking) I thoroughly enjoyed it.