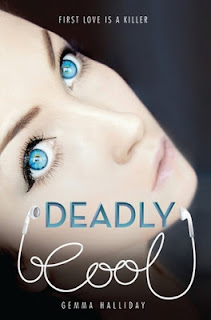 Author: Gemma Halliday
Series: Deadly Cool # 1
Genres: Mystery, Contemporary, Young Adult
Publisher: HarperTeen
Released: 11 October 2011
Summary: courtesy of goodreads.com Hartley Grace Featherstone is having a very bad day. First she finds out that her boyfriend is cheating on her with the president of the Herbert Hoover High School Chastity Club. Then he’s pegged as the #1 suspect in a murder. And if that weren’t enough, now he’s depending on Hartley to clear his name.
But as much as Hartley wouldn’t mind seeing him squirm, she knows he’s innocent, and she’s the only one who can help him. Along with her best friend, Sam, and the school’s resident Bad Boy, Chase, Hartley starts investigating on her own. But as the dead bodies begin to pile up, the mystery deepens, the suspects multiply, and Hartley begins to fear that she may be the killer’s next victim.
My Review: Deadly Cool was one of those books that I read in a weekend.  Mainly because I completely adored Hartley and the story line.  Hartley is the perfect main character, because although her motives aren’t always logical (trying to clear her cheating boyfriend’s name) her heart is in the right place.  But it wasn’t just Hart that made this story so sweet and lovely.
When I was younger I used to read stories like this all the time.  Stories that had a little bit of romance, a lot of humor, a pretty real parent, a fantastic best friend, and a fun leading lady.  Lately, I feel like the genre has lost a little bit of its fluffiness.  Don’t get me wrong, I’m not complaining about it, but in a genre that is dominated by paranormal, dystopian, fantasies, or heavy contemporary fiction, Deadly Cool was a welcome breath of fresh air.  If you want a comparison, Hartley was like an older Sammy Keyes (from the Sammy Keyes series by Wendelin Van Drannen), or a younger Heather Wells (from Meg Cabot’s Heater Well’s mysteries).  She is funny, kind of an amateur, and full of . . . well, heart.
Her best friend Sam adds in the perfect balance.  So many things that Sam says had me laughing out loud, Sam is the character in our reality while Hartley is kind of operating in her own (which is why this is so fun).  She has a healthy relationship with her boyfriend, but balances out having Hartley as a best friend perfectly.  The setting of Silicon Valley was another strength to this awesome story, and Hartley’s mom.  Wow, talk about a parent that was active without being overbearing or mean.  Everything about Hartley’s mom screams “I love my daughter” not “I’m suffocating my daughter” the love between Hartley and her mother was real, and honest.  It was refreshing to see such a good mother/daughter relationship.
And of course, you can’t forget the love interest that was not only incredible, but also pretty darn real.  I won’t expose too much, but let me just say that although this definitely was NOT a story based around the romance, there was still a little (key word: little) bit there that added to the immense grin that I had while reading this book.  Chase was just such a fun guy, he reminded me a little bit of a young Sam/Dean Winchester (from Supernatural) in the fact that he drives an old beater car and is kind of a bad a--. And he looks out for Hartley.  He doesn’t stalk her or stare at her while she sleeps, he is honestly concerned for her safety, he is like that really hot best friend you had in high school that you wanted to secretly hook up with. Seriously.  Although not much happens at all between Chase and Hartley, it was still fun to watch them figure each other out.
The strongest part of this novel for me was obviously the characterizations.  All of the characters are strong and well thought out, from the (not so) bumbling Detective, right down to the murderer.  I have to say, not many female characters in YA leave this kind of impression, to date there have been maybe three: Anna (from Anna and the French Kiss) Rory (from The Name of the Star) and now Hartley who I would seriously not mind having as a real live best friend.  I cannot wait to read Social Suicide, starting . . . now.