Finnikin of the Rock 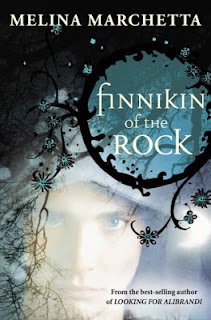 Genres: Fantasy, Adventure, Young Adult
Publisher: Viking Australia
Released: 29 September 2008
Summary: courtesy of goodreads.com Finnikin of the Rock and his guardian, Sir Topher, have not been home to their beloved Lumatere for ten years. Not since the dark days when the royal family was murdered and the kingdom put under a terrible curse. But then Finnikin is summoned to meet Evanjalin, a young woman with an incredible claim: the heir to the throne of Lumatere, Prince Balthazar, is alive.
Evanjalin is determined to return home and she is the only one who can lead them to the heir. As they journey together, Finnikin is affected by her arrogance . . . and her hope. He begins to believe he will see his childhood friend, Prince Balthazar, again. And that their cursed people will be able to enter Lumatere and be reunited with those trapped inside. He even believes he will find his imprisoned father.
But Evanjalin is not what she seems. And the truth will test not only Finnikin's faith in her . . . but in himself
My Review:  Okay, here is a disclaimer: I read Finnikin of the Rock and Froi of the Exiles in quick succession (as in, I finished Finnikin and immediately at 2:00 in the morning began Froi) and I’m not saying that I confused the two, but because I am admittedly more drawn to darker characters, I liked Froi better (not by a lot) and that is why I am giving Finnikin a four.  Not because it wasn’t superb, but because it’s follow-up was hands down one of my favorite fantasy books ever.
Finnikin was such a fun character, and he was so honest.  A nineteen year old who has been traveling around with an old Sir (who I imagined to be a Sean Connery/Patrick Stewart like, seriously) especially a place that has been ravaged by war, I felt like he depicted this lifestyle perfectly.  Evanjalin was a character that I definitely hated in the beginning, as was the thief.  Both seemed to be almost too motivated and they didn’t explain themselves in the beginning (especially Evanjalin) to the point where I was more annoyed with her than rooting for her.  I wouldn’t mention it, but until everything is revealed she really got on my nerves.
The curse was impeccable.  I don’t read a lot of fantasy books, I think the last one that I read was Enchated by Alethea Kontis, so they aren’t really my strong point as far as finding parallels in other books.  With Finnikin I felt like the curse, and the breaking of the curse was really well done. (do fantasy books have a lot of riddle like curses that main characters must go on a quest in order to break?) How everything fit together, and how, as a reader, I was figuring things out as the characters were was really amazing.
When you read a lot of books you tend to be able to pick out the ending relatively quickly.  Rarely do things come as a surprise, and the fact that Marchetta was able to literally bring me along for the ride was amazing.  The descriptions of the world of Lumatere, and all of the other races and kingdoms that Evanjalin, Finnikin, Sir Topher, (and numerous other characters) are described so beautifully and thoroughly that I felt like I was actually there.
If you like high fantasy, I definitely would recommend this one.  I consider myself more of a contemporary lit lover, and I still found this one quite appealing. Maybe it's Marchetta, if you like her contemp stuff, this had a lot of echos, although it's fantasy, some of her core themes are seen in this one (the importance of family, and fighting for/earning what you want), but if you're into books that have excellent world building, Marchetta does that here as well. A really fun, well done (in my amateur opinion) fantasy.