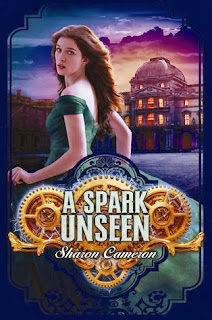 Series: The Dark Unwinding # 2
Genres: Steampunk-lite, Romance, Young Adult
Publisher: Scholastic
Released: 24 September 2013
Summary: courtesy of goodreads.com The thrilling sequel to Sharon Cameron's blockbuster gothic steampunk romance, THE DARK UNWINDING, will captivate readers anew with mystery and intrigue aplenty.
When Katharine Tulman wakes in the middle of the night and accidentally foils a kidnapping attempt on her uncle, she realizes Stranwyne Keep is no longer safe for Uncle Tully and his genius inventions. She flees to Paris, where she hopes to remain undetected and also find the mysterious and handsome Lane, who is suspected to be dead.
But the search for Lane is not easy, and Katharine soon finds herself embroiled in a labyrinth of political intrigue. And with unexpected enemies and allies at every turn, Katharine will have to figure out whom she can trust--if anyone--to protect her uncle from danger once and for all.
Filled with deadly twists, whispering romance, and heart-stopping suspense, this sequel to THE DARK UNWINDING whisks readers off on another thrilling adventure.
My Review: Those of you who know me, or who read this blog know that Sharon Cameron’s The Dark Unwinding was one of my favorite reads of 2012, and it was with much anticipation I awaited the release of A Spark Unseen, so when I was approved on NetGalley I had a little dance party.  Let me tell you – A Spark Unseen did not disappoint. As a matter of fact, this second novel is better than the first.
First up I’m going to say the one thing I did not like about A Spark Unseen: Lane.  Where the heck is that boy.  Don’t get me wrong, I completely understand that the major plot motivation in A Spark Unseen is Katharine looking for Lane, and I loved seeing Katharine grow as a character (and seeing how much she has grown in the eighteen months since Lane left).  I just really like Lane.  I liked his stoicism and his love of Uncle Tully, I liked how he grounded Katharine and never let her get away with anything, but alas.  I understand why he wasn’t there, I just would have liked it if he could have been.
Besides that, there isn’t much to do except for totally glow about this second novel.  I loved Cameron’s perspective of Paris, I loved how real she makes everything in her novels seem.  How she is able to heighten emotions in her novels, they’re so atmospheric.  I love how she is taking this incredible genre and isn’t retelling an already told story.  This is one of my favorite series because it is one of few that come close to having the same tone as Jane Eyre (which is above and beyond my favorite novel ever). I love that Cameron is exploring this genre and pushing it into the mainstream.  This is a series I love recommending to people time and time again because it has it all: there’s romance, action, adventure, mystery, and suspense (of the heart pounding variety), in addition to an excellent cast of characters.  The bad guys are worse (I found myself crying and shaking tears of anger and sadness), and the mystery is SO BIG I loved it.  There are some authors who can’t make mysteries of this size believable, but Sharon Cameron can, and she does so beautifully.  I am excited to read her future work, and I can only hope we get to see the wonderful cast and characters from this delicious series again.
(FYI: I DO understand why Lane wasn’t there, I just missed him like a hug. He’s one of my favorite YA guys, and I just didn’t like not having him around.  I understood why he wasn’t, and if he had been Katharine wouldn’t have been as incredible was she was, wouldn’t have grown as much.  What can I say, I just love me some Lane Moreau.)

This reviewer would like to thank NetGalley and Scholastic books for a copy of this eARC in exchange for an honest review.
Posted by E at 2:14 PM