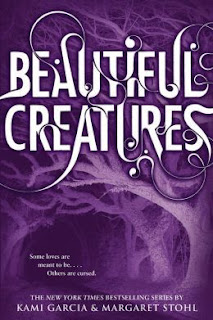 Authors: Kami Garcia and Margaret Stohl
Series: The Caster Chronicles # 1
Genres: Paranormal Fantasy, Young Adult, Romance
Publisher: Little, Brown, and Company
Released: 1 December 2009
Summary: courtesy of goodreads.com There were no surprises in Gatlin County.
We were pretty much the epicenter of the middle of nowhere.
At least, that's what I thought.
Turns out, I couldn't have been more wrong.
There was a curse.
There was a girl.
And in the end, there was a grave.
Lena Duchannes is unlike anyone the small Southern town of Gatlin has ever seen, and she's struggling to conceal her power and a curse that has haunted her family for generations. But even within the overgrown gardens, murky swamps and crumbling graveyards of the forgotten South, a secret cannot stay hidden forever.
Ethan Wate, who has been counting the months until he can escape from Gatlin, is haunted by dreams of a beautiful girl he has never met. When Lena moves into the town's oldest and most infamous plantation, Ethan is inexplicably drawn to her and determined to uncover the connection between them.
In a town with no surprises, one secret could change everything
My Review:  Okay, I’m going to say one thing up front: this book took me FOREVER to get through.  Usually I read 3-4 books a week, but this one.  This one took me nearly a week to get through.  It was annoying but lovely at the same time.  The thing about Beautiful Creatures is that it doesn’t have an overwhelming sense of needing to be read.  If you read Beautiful Creatures – you’ve got to really want it.  For example: I like apple pie.  When I see apple pie on a menu I order it.  Always.  I have this overwhelming need to order apple pie.  Like a pie quest and I am always on it.  Now, I like cheesecake too, but I can’t justify spending $4.00 on a slice, not when I can buy an entire cheesecake at Costco for, like $11.99 (in the back of my mind I know this same concept applies to apple pie, but it’s just not the same).  Beautiful Creatures was my cheesecake.  Although initially incredibly excited about it, and in the end it was quite satisfying – I wasn’t jonesing for it like I would for, say, The Coldest Girl in Coldtown.
This book has been reviewed and reviewed, and reviewed again, so here’s what I’m going to say:  I enjoyed this.  I enjoyed this like I enjoy a good analogy.  I enjoyed this for everything that it was – a deeply passionate story about life in the South and discovering new aspects of where you live, struggling with who you are and overcoming obstacles.  Was it long? Yes.  Did is move relatively slowly? You bet your bottom dollar it did.  Am I glad I read it?  Yes.  Do I think it will appeal to everyone?  Probably not.  As a matter of fact, this is probably more likely going to appeal to adults than young adults because it reads like an adult novel to me – there isn’t a huge gasping need to get to the horizon, there is a faint and familiar lull which I think is a common feeling in the Southern United States – it isn’t necessary to move someplace quickly just as long as you’re working towards something.
I don’t know if I’ll read the sequel.  The sad thing about Beautiful Creatures is that if I had read this a few years ago – when it first came out – I would have gobbled the series up like crazy – but I’ve read this story before.  I’ve read its sequels before, and although this is beautiful and lovely and insightful – I think I’ll wait a bit before I dive into the rest.