Movie VS. The Great Gatsby

Alrighty it's Movie VS Book and today we're going to chat about:

I'm going to be analyzing the similarities and differences between the book which looks like this: 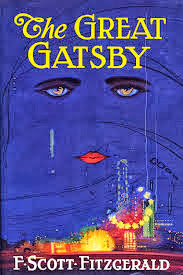 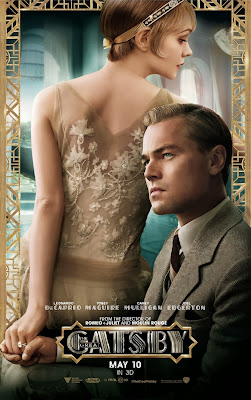 The book: Now, obviously.  If you have been asked to read this book for school and you're trying to get out of it . . . it's less than 150 pages.  And it's worth it.  Plus, you'll probably spend more time looking up how the book and movie are different than you would reading the book.

With a book like The Great Gatsby, making it into any film format would be a challenge, because most of the book takes place in Nick Carraway's head.  There is a lot of internal dialogue and a lot of "telling" what is going on/what happened and not "showing" what is going on, which I think is why some readers find this book tedious.

But, this isn't about exploring the nuances of the book it's about comparing the book to the movie! (Though if you want an in depth look at the book by one of my favorite people on the internet you can click here) First up differences.
1. Nick Carraway doesn't end up in a sanitarium.  He actually goes back to the mid-west, where he came from, and where his family is from.
2.  The Buchann's daughter makes more appearances in the book than the film (which she's in for all of five seconds).
3. Some of the character dialogue has been changed - obviously because most of the story takes place internally.
4. Tom Buchann knows how to throw a party too.  Not necessarily a good part.  But the dude does throw some lame parties in the novel.
5. There was a lot more yellow in the novel.  The film chose to play up the significance of the green light (which is the bigger color significance) but the yellow is underplayed (with the exception of Gatsby's car.)  Fun game.  Drink your beverage of choice every time you see yellow (it is in there just not focused on like in the novel) If you've read the book you'll noticed it a lot more.  It's like I Spy for adults.  And there is quite a bit of it.  It's just not as played up in the film as it is in the novel.
6. Nick and Jordan have a little bit more going on in the novel than just that weird "are we more than friends?" thing they've got going in the film.

And now let's talk about the similarities.
I felt like the overall tone of the both the book and the film are the same.  They are both illustrating this unachievable dream.  I felt like the characters were expertly played.  I loved this take on Gatsby, his anger when things don't go according to his imagined script for his life.  The set depictions, to me were entirely accurate, as well as Gatsby's parties.  Now I know a lot of people think "they didn't play hip hop in the 1920's" and you would be correct, but Jazz was the Hip Hop of the 20's.  It wasn't mainstream and it wasn't stuff you found in old bars.  Jazz was a new form of music (this was before rock and roll, before hip-hop, and r&b.)  Musically what was being produced before the 1920's was basically classical music - and opera.  Although stage musicals had begun, Jazz music was really the first upbeat music where you could dance a quick Charleston to.  So although they didn't stick to Jazz, I felt like theatrical audience watching this movie felt something similar to what the characters who attended Gatsby's parties felt.  A complete sensory overload.  And I, for one, loved this soundtrack.  I feel that way about all of Baz Luhrman's films, you can't watch his movies without wanting to buy the soundtrack.
Finally, the scenes in the movie are taken directly out of the novel.  They didn't add in any crazy bits that couldn't be found in the novel - though they certainly left out some things - and a lot of the language of the novel remains intact.  When you see this film - especially when Nick is telling the story, you know the dialogue is either straight from the novel (in many cases it is) or it's very similar.
I felt like they nailed the Daisy/Gatsby relationship.  A relationship that is so deep on one side and so shallow on the other.  This movie makes you question - like the book - just how shallow Daisy is.  There are so many things to discuss when it comes to this book.  SO MANY THINGS.  It makes me wish I was still in school and taking literature classes so I could discuss all the things. 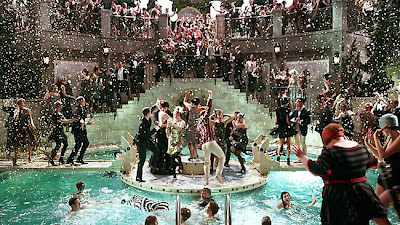 Here is my suggestion: if you're having a hard time getting through the book - rent the movie.  It helps put a visual picture to the book.   If you've read the book a hundred times - see the movie.  I'm not going to guarantee you'll like it.  But I will say I did.  I haven't ever had the inclination to applaud in a film until I saw this.  The overall feels I had leaving the theater, where the same feels I had when I finished the book for the first time. 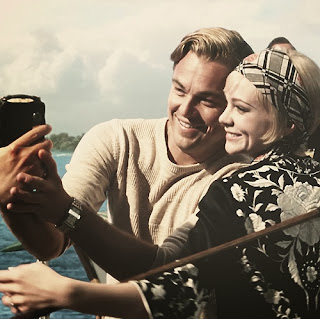