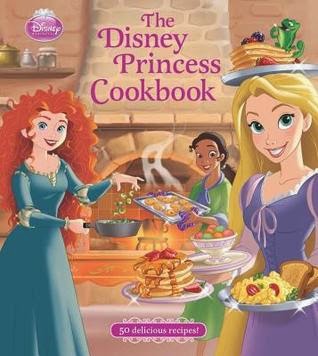 Author: Cynthia Littlefield
Series: Stand Alone
Genre: Cookbook
Publisher: Disney Press
Release Date: 1 October 2013
Summary: From Rapunzel's Frying Pan Eggs to Ariel's Sea Turtle Cupcakes, this beautiful cookbook is filled with delicious recipes inspired by the Princesses' many adventures. With simple step-by-step instructions, mouth-watering photos of each dish, and helpful tips from the Princesses themselves, this cookbook makes it easy to whip up some kitchen magic.
Review:  When I told junebug I was going to review a cookbook she kind of freaked out, so let me just say: I KNOW this is out of the norm for me, and I take full responsibility if you guys think this is a bad idea, but this is just such a fantastic cookbook and I can't help but promote it.  To start, a history.  I don't cook a lot, or bake a lot for that matter.  I can make chocolate chip cookies and macaroni and cheese from a box, and I considered those my crowning achievements in the kitchen.  The problem?  I am a total sucker for cookbooks, I have, like five, which isn't a lot compared to most people, but for someone who barely braves the microwave on a good day, it's kind of a bad habit.  I've attempted recipes from all of the cookbooks I own (and multiple recipes from The Harry Potter Cookbook) and they were all 1. hard for me to understand, and 2. never turned out the way I think they were meant to.
Low and behold this book comes through cataloging one day and I freak out.  A cookbook!  A Disney Princess cookbook.  What the WHAT?  Yes, yes I will be checking you out and taking you home.  I browsed the recipes, they were fun and catchy, and the illustrations of the princesses were beautiful, and every recipe had a photograph to go with it.  Plus there was a rating system from easy to hard.  Well, the library doesn't let you keep things forever so I ended up asking for this for my birthday.
I've made five recipes since then (my birthday was about 3 weeks ago) and they've all turned out great!  Some of you may think: duh, you're using a cookbook designed for 5-10 year olds of course they're going to work; but let me tell you: rarely does anything I bake turn out so well on the first try, and rarely do I try new things that consistently turn out well: BUT THESE DID.
I've made: Pascal's Pancakes, Frying Pan Eggs, Belle's Baguette, Aurora's Homemade Jam, and Snow White's Apple Dumplings and they've all been delicious, and I can't WAIT to try the rest of the recipes because they ALL sound superb (I'm a picky eater, so rarely does every recipe sound absolutely tantalizing, but all of the recipes in this sound fab.) if you've got picky eaters at home, get your hands on a copy - if you don't want to purchase it, put in a patron request at your local library.
I highly recommend this for anyone who is just getting in to baking, has little girls who are Disney Princess fans, or someone looking for fun, easy recipes to try.  Whether your five or ninety-five, this cookbook is pretty fantastic.
Posted by E at 10:00 AM