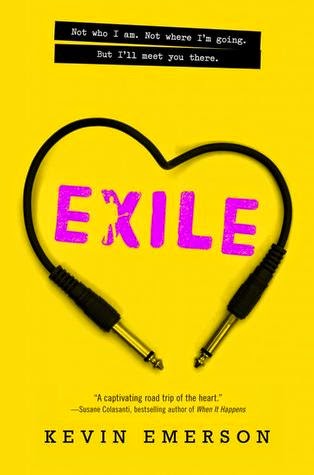 Author: Kevin Emerson
Series: Exiles # 1
Genre: Contemporary, Mystery (sort of)
Publisher: Katherine Tegen
Release Date: 29 April 2014
Summary: Catherine Summer Carlson knows how to manage bands like a professional—she’s a student at the PopArts Academy at Mount Hope High, where rock legends Allegiance to North got their start. Summer knows that falling for the lead singer of her latest band is the least professional thing a manager can do. But Caleb Daniels isn’t an ordinary band boy—he’s a hot, dreamy, sweet-singing, exiled-from-his-old-band, possibly-with-a-deep-dark-side band boy. And he can do that thing. That thing when someone sings a song and it inhabits you, possesses you, and moves you like a marionette to its will.
Summer also finds herself at the center of a mystery she never saw coming. When Caleb reveals a secret about his long-lost father, one band’s past becomes another’s present, and Summer finds it harder and harder to be both band manager and girlfriend. She knows what the well-mannered Catherine side of her would do, but she also knows what her heart is telling her. Maybe it’s time to accept who she really is, even if it means becoming an exile herself. . . .
Review:  You should know up front, I don't read a lot of novels about music - non-fiction yes.  I just finished Keith Richard's autobiography and it blew my mind - but novels?  Not so much.  The reason I don't tend to read a lot of novels where music is a central theme is because I judge from page one.  As a matter of fact, in recent memory, the only novels about music I remember distinctly enjoying were Gayle Forman's If I Stay and Where She Went, but then those weren't really about music were they?
It is with that in mind, that bias I automatically have, that I went into this book; and let me tell you: Kevin Emerson knows music.  This guy gets it, he knows what it's like to feel the beat with every part of you.  To stand at the back of a converted-garage covered in sweat and smiling because you haven't felt this great in a while, because the music is flowing around and through you.  It's the beating of your heart, and the rumble in your fingers, its the thumping of the bass line in your heels, digging into the concrete, blowing you apart, and then piecing you back together.  I'll give him that, he knows music.
But, I constantly had one question going through my mind: why is this from a female perspective?  Caleb was the interesting character, Catherine/Summer felt stock.  She went through average high school troubles, and had average parent troubles, and average relationship troubles (hint: instant love is still annoying, even if you're acknowledging it through the entire book).  Whereas Caleb had all of these dimensions, he had a mystery surrounding him that I, personally, felt could have been better explored through turning him into the narrator - instead of turning him into the "broody love interest".  There was also something about Catherine/Summer's voice that felt sadly inauthentic.   Like she was trying to be every other young adult contemporary female out there, and unfortunately failing miserably.
Don't mistake me: I loved the music, I loved reading about the music.  I just had a hard time standing the voice that told me about it, when I knew there were other characters in the story who were more passionate about not only the music, but what was happening to them.
Posted by E at 12:33 PM