The Chaos of Stars 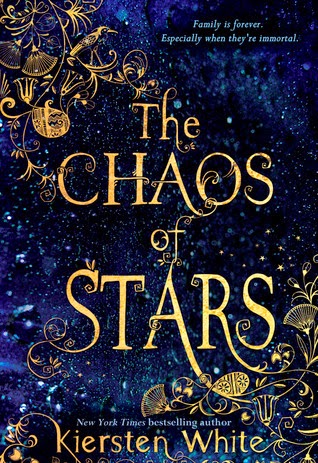 Author: Kiersten White
Series: Stand Alone
Genre: Mythology, Romance
Publisher: HarperTeen
Release Date: 10 September 2013
Summary: Isadora's family is seriously screwed up—which comes with the territory when you're the human daughter of the ancient Egyptian gods Isis and Osiris. Isadora is tired of living with crazy relatives who think she's only worthy of a passing glance—so when she gets the chance to move to California with her brother, she jumps on it. But her new life comes with plenty of its own dramatic—and dangerous—complications . . . and Isadora quickly learns there's no such thing as a clean break from family.
Blending Ally Carter's humor and the romance of Cynthia Hand's Unearthly, The Chaos of Stars takes readers on an unforgettable journey halfway across the world and back, and proves there's no place like home
Review:  I read this book quite a long time ago, then went back and re-read some of it today as a refresher before writing this review.  Overall I really enjoyed this book, I always like it when I find a good young adult stand alone.  Funnily enough this novel made me realize why so many YA authors write series.  It's hard to fit a full, well rounded story with fleshed out characters into a YA novel.  I wouldn't have minded another 100-200 pages in this book.
I loved the character of Isadora. I thought she was funny and self centered and so much the epitome of teenager.  I spend a lot of time in schools, and although Isadora wasn't necessarily somebody I would want to be best friends with, I did think she had a very similar personality to a lot of girls in that age group.
I loved her friends, and her family (especially her family) the integration of Egyptian Gods and Goddesses was very well done, and in such a fun way that it made me want to read up on my Ancient Egyptian literature.  Growing up we always focused on Greek and Roman mythology, and it was refreshing to read about the Egyptians.
The only thing I had a hard time was the overall climax of the book, it was resolved so quickly.  I mean we just left Isadora and Ry hanging out, and all the ends were tied up but I still want something to happen next.  I would recommend checking this out from the library if you're in the mood for a quick fun read, but if you're thinking about buying it: wait for the paperback to come out - as long as the paperback has the same cover as the hardback that it (*swoon*).
Posted by E at 8:51 PM