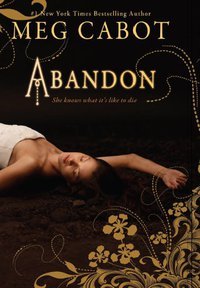 Author: Meg Cabot
Series: Abandon Trilogy # 1
Genres: Fantasy, Young Adult, Romance, Mythology
Publisher: Point
Released: 26 April 2011
Summary: via goodreads.com Though she tries returning to the life she knew before the accident, Pierce can't help but feel at once a part of this world, and apart from it. Yet she's never alone . . . because someone is always watching her. Escape from the realm of the dead is impossible when someone there wants you back. But now she's moved to a new town. Maybe at her new school, she can start fresh. Maybe she can stop feeling so afraid.
Only she can't. Because even here, he finds her. That's how desperately he wants her back. She knows he's no guardian angel, and his dark world isn't exactly heaven, yet she can't stay away . . . especially since he always appears when she least expects it, but exactly when she needs him most. But if she lets herself fall any further, she may just find herself back in the one place she most fears: the Underworld.
My Review: Abandon was…difficult. I LOVE Meg Cabot books, seriously. She is one of the authors that I actually follow blog-wise. I think she is hilarious, I usually count down the days until her books are released, so I was pretty disappointed with Abandon. Abandon doesn’t sound like Meg to me (see, I call her Meg, that is how much of an affinity I have with this woman). Abandon sounds…older. I wanted to like this book, I wanted to like this book so much that I read it twice. I love Meg’s characters, I think that they are hilarious and captivating. Except Pierce. Pierce is kind of an idiot. Pierce is annoying. Pierce is...well, Pierce. I wanted Pierce to be more intellectual. She would do the strangest things and then expect everything to work out in her favor. I know that Meg's heroines aren't necessarily the brightest bulbs in the box, but I just felt like Pierce was being forced into a role that didn't really suit her, and with that I mean I felt that she was forced into being the "nice girl" everyone is always telling her how nice and helpful and great she is, which is nice, except I would like to see how nice and helpful and great she is, not have characters telling me right and left. I don't know, maybe I'm alone in this, but if you want a Persephone re-imagining then skip this one for something else. (I recommend The Goddess Test, even though it’s completely different from the actual Persephone tale. Still, the characters were more entertaining and less ridiculous than in Abandon.)