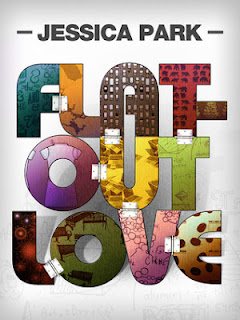 Author: Jessica Park
Series: stand-alone
Genres: Young Adult, Contemporary, Realistic, Romance
Publisher: Self-Published
Released: 11 April 2011
Summary courtesy of goodreads.com: Flat-Out Love is a warm and witty novel of family love and dysfunction, deep heartache and raw vulnerability, with a bit of mystery and one whopping, knock-you-to-your-knees romance.
When Julie's off-campus housing falls through, her mother's old college roommate, Erin Watkins, invites her to move in. The parents, Erin and Roger, are welcoming, but emotionally distant and academically driven to eccentric extremes. The middle child, Matt, is an MIT tech geek with a sweet side ... and the social skills of a spool of USB cable. The youngest, Celeste, is a frighteningly bright but freakishly fastidious 13-year-old who hauls around a life-sized cardboard cutout of her oldest brother almost everywhere she goes. Flat-Out Love comes complete with emails, Facebook status updates, and instant messages.
My Review: Flat-Out Love is a book that I think of as a perfect weekend read. It has everything you want in a; what I like to call “couch potato book” (aka books that you tend to nestle into the couch for hours to read on a rainy afternoon). A little bit of mystery, a little bit of adventure, an incredibly dysfunctional family (emphasis on the ‘fun’ part) and a lot of romance (not gross romance, honest to goodness, true blue romance). I thoroughly enjoyed how much this book played on the idea of social networking, especially facebook. Facebook as so integrated itself into our lives and I felt the dialogue read so smoothly, and quickly. It was almost like reading someone’s journal, “today so and so fb chatted me” etc. etc. There were a lot of *swoon* moments between the characters and the ending was so sweet and perfect. The family dynamic between the Watkins is also something to really pay attention to. It is such a wonderfully dysfunctional family, and Celeste stole my heart from her first appearance. She is the sweetest and most exceptional character in the story.
I also liked the way that Park explored the emotions between the characters in the book, especially the family dynamic. Not only of the Watkins, but also how Julie fits into their lives, as well as Julie’s relationship with her parents. Although the only thing I did seem to struggle with is that Julie’s dad is talked about, but nothing is ever resolved between the two of them. Everything else is tied together quite nicely, maybe this will jump off for a sequel? I know I wouldn’t mind that…
The other thing I want to stress is how this book didn’t feel self published at all. I’ve read a few self-pub’s before and could tell right off the bat, either through spelling errors, or massive flaws in the character consistency or holes in the plot line. Flat Out Love was not like that at all. I didn’t even realize it was a self pub until after I had read it and gone to the author’s website. So please, don’t let the self pub branding deter you, this book was exceptional for the beach, or couch potato read. I’m hoping to get a copy on the enhanced version sooner or later, because I think that would be pretty fantastic too.