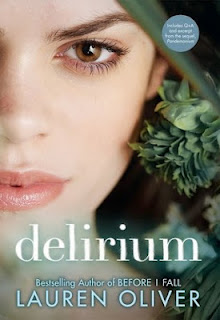 Author: Lauren Oliver
Series: Delirium # 1
Genres: Young Adult, Dystopia, Romance, Adventure
Publisher: HarperTeen
Released: 1 February 2011
Summary: courtesy goodreads.com Before scientists found the cure, people thought love was a good thing. They didn’t understand that once love -- the deliria -- blooms in your blood, there is no escaping its hold. Things are different now. Scientists are able to eradicate love, and the government demands that all citizens receive the cure upon turning eighteen. Lena Holoway has always looked forward to the day when she’ll be cured. A life without love is a life without pain: safe, measured, predictable, and happy. But with ninety-five days left until her treatment, Lena does the unthinkable: She falls in love.
My Review: Delirium was one of those books that sort of stuck with me. I’m not sure why, I like to think it is because Delirium is one of my first experiences with dystopia, but really, who knows? Lena and Alex really tugged at my heart strings from the beginning, they were both at time such wonderfully complex and yet simple characters. The only thing that I did have a hard time with was how vague things seemed, this could have very well been because for the first half of the book I kept thinking Portland, Oregon, not Portland, Maine (being from the West coast, I tend to think that way) and all I could think was, “wow, this version of Portland is really different from the current version of Portland.” It wasn’t until about the half-way point until I realized that they were actually in Portland, Maine so that was slightly confusing.
The ending was also kind of irking. Let’s just say it’s a cliff hanger (Pandemonium ends in a cliff hanger too, just so you know) I felt that the pacing of this book of lovely, it felt like a final summer of love for me, easily moving forward towards the inevitable, but they’re teenagers so really they’re living in the moment more than adults would, and you can really feel that in Delirium, until the end. The end kind of slaps you in the face out of no where and keeps your heart racing for a moment to the point where you can’t help but think, “did I get a faulty copy, because I swear it doesn’t end there!”