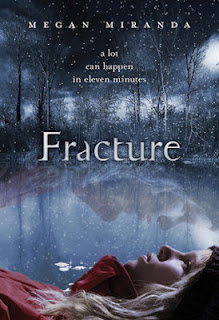 Author: Megan Miranda
Series: Stand Alone
Genres: Paranormal, Young Adult, Supernatural, Fantasy
Publisher: Walker Childrens
Released: 17 January 2012
Summary: via goodreads.com Eleven minutes passed before Delaney Maxwell was pulled from the icy waters of a Maine lake by her best friend Decker Phillips. By then her heart had stopped beating. Her brain had stopped working. She was dead. And yet she somehow defied medical precedent to come back seemingly fine. Everyone wants Delaney to be all right, but she knows she's far from normal. Pulled by strange sensations she can't control or explain, Delaney finds herself drawn to the dying. Is her altered brain now predicting death, or causing it? Then Delaney meets Troy Varga, who recently emerged from a coma with similar abilities. At first she's reassured to find someone who understands the strangeness of her new existence, but Delaney soon discovers that Troy's motives aren't quite what she thought. Is their gift a miracle, a freak of nature-or something much more frightening? For fans of best-sellers like Before I Fall and If I Stay, this is a fascinating and heart-rending story about love and friendship and the fine line between life and death.
My Review:  Fracture was a hard one for me, mainly because I felt like there were two warring plot lines that didn’t feel like getting along. One was a paranormal, ghost story, first love sort of thing and the other was a girl trying to figure out what exactly has happened to her. A lot of books have competing plot lines, but for some reason in Fracture, it doesn’t work. The reason, in my opinion that they don’t work is because Miranda skims the surface of both without making either the dominant.
Is Delaney somehow a paranormal anomaly now? Or is she just crazy? I felt like her condition was never really explained and that things were all over the place. Like a parent trying to keep a child under control. That’s how this plot felt to me. Like someone was constantly getting reigned back in. Although I really liked the idea, it almost had too much basis in the realm of reality that when the paranormal stuff was introduced I had a hard time believing it. This also made it hard to get behind any of the characters. Delaney makes a lot of lame decisions concerning Decker and Troy and I get that she is just a girl trying to figure things out, but seriously. Another love triangle? Why not just axe Troy, he was annoying and vindictive and kind of a creeper anyway.
For a novel about death, that is sort of similar to this I would go for the Soul Screamer series, because although they aren’t exactly the same at least the plot isn’t all over the place.