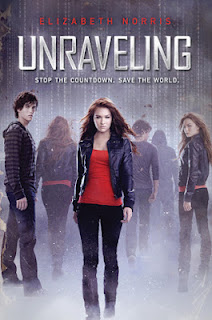 Author: Elizabeth Norris
Series: Unraveling # 1
Genres: Science Fiction, Young Adult, Paranormal, Romance.
Publisher: Blazer + Bray
Released: 24 April 2012
Summary: courtesy of goodreads.com Two days before the start of her junior year, seventeen-year-old Janelle Tenner is hit by a pickup truck and killed—as in blinding light, scenes of her life flashing before her, and then nothing. Except the next thing she knows, she's opening her eyes to find Ben Michaels, a loner from her high school whom Janelle has never talked to, leaning over her. And even though it isn't possible, she knows—with every fiber of her being—that Ben has somehow brought her back to life. But her revival, and Ben's possible role in it, is only the first of the puzzles that Janelle must solve. While snooping in her FBI agent father's files for clues about her accident, she uncovers a clock that seems to be counting down to something—but to what? And when someone close to Janelle is killed, she can no longer deny what's right in front of her: Everything that's happened—the accident, the murder, the countdown clock, Ben's sudden appearance in her life—points to the end of life as she knows it. And as the clock ticks down, she realizes that if she wants to put a stop to the end of the world, she's going to need to uncover Ben's secrets—and keep from falling in love with him in the process. From debut author Elizabeth Norris comes this shattering novel of one girl's fight to save herself, her world, and the boy she never saw coming.
My Review: There is a book that I’ve read recently that this book really reminds me of, or maybe it’s a television show that I’ve watched? That is how this book felt to me. Like I had read everything in it somewhere before. Don’t get me wrong, it was good. I liked the characters (could have done with out so many F bombs, though) and Janelle and Ben played really well off of each other in that cutesy first love sort of way. The science fiction aspect was pretty hard core and the author is pretty smart for being able to put it all together (although it did come out in the atypical “let me tell you everything about me” scenes) so that aspect I was a fan of.
I liked the action sequences, I loved the messed up character of the mom, but still, there was something that felt so familiar about this book…oh yes. Because it reminded me of Twilight. As in the epic read that everyone read and no one will admit to reading anymore. Yep, that Twilight. It felt like Twilight 2.0, with Norris going that extra half-inch with her characters that Stephanie Meyer never did, a lot of scenes felt like they were straight out of that read (the truck scene at the beginning, the big reveal, the in-fighting of a select group) it was a more action/adventure, science-fiction version of Twilight. I promise that I don’t say this lightly. Rarely do books remind me of other books, but as I was discussing this one with New Romantic I could not stop thinking about how familiar it felt, to the point where she wondered if I’d read it before (impossible, seeing as it only came out a week ago).
Unraveling was an entertaining read, it had everything that a reader is looking for in a young adult book, action/adventure, mystery, romance, a hint of the paranormal, some laughs, and some tears. It was well written, though at times became a little redundant plot-wise. It left me feeling a little bit ‘meh’. As in: maybe I’ll read the sequel, but maybe I won’t. It was really quick, pacing wise so you can read it in a few days, but it isn’t one that I would keep going back to like a bad habit, one read was enough for me.