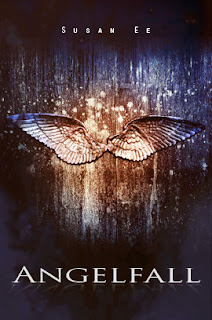 Author: Susan Ee
Series: Penryn and the End of Days # 1
Genres: Paranormal, Science Fiction, Fantasy, Young Adult
Publisher: self-published
Released: 21 May 2011
Summary: via goodreads.com It’s been six weeks since angels of the apocalypse descended to demolish the modern world. Street gangs rule the day while fear and superstition rule the night. When warrior angels fly away with a helpless little girl, her seventeen-year-old sister Penryn will do anything to get her back. Anything, including making a deal with an enemy angel. Raffe is a warrior who lies broken and wingless on the street. After eons of fighting his own battles, he finds himself being rescued from a desperate situation by a half-starved teenage girl. Traveling through a dark and twisted Northern California, they have only each other to rely on for survival. Together, they journey toward the angels’ stronghold in San Francisco where she’ll risk everything to rescue her sister and he’ll put himself at the mercy of his greatest enemies for the chance to be made whole again.

My Review: Angelfall was totally the angel book that I have been waiting for and the one that I hold every angel book I’ve read since against. There were so many incredible things about Angelfall that make it a recommendation for me. The relationship between humans and angels is really believable, and Raffe’s views religiously are also ones that I felt like reality as opposed to some of the pictures that are painted in other angel books. Susan Ee’s angels are really gritty and dirty and not completely perfect, and I really enjoyed that aspect. The relationship between Penryn (love that name!) and Raffe is one of my favorites to read over and over again because of its simplicity.
Penryn and Raffe are two people thrown together in extenuating circumstances and the way in which they both resist and fall into love with each other is amazing. Not only that by Penryn is such an amazingly strong female character. She reminds me a lot of Katniss Everdeen (from The Hunger Games) in that her need for survival and the survival of her family supercedes the need for everything else. And because the book is told from her point of view you see her strength but also her vulnerabilities. Ee does such a great job at showing the dynamic of the characters and their place in the world. She also does an incredible job at unraveling the mystery that is the angels and what they’re really doing on earth.
Angelfall, as I mentioned is so incredibly dynamic and multi-layered. I can’t remember that last time I read a book with such wonderful characters. Characters definitely make or break a novel for me and the characters in Angelfall really made the novel because of their dimension. They were all fighting for different things but that you get to see that, even though it is told through one point of view shows Ee’s strength as a writer. Also, look out for the relationship between Penryn and her mother, and the heartbreaking scene between Penryn and Raffe that is towards the end.
For everyone who has an e-reader I highly recommend that you spend the money and download this one because it was a truly great read.  (And update: It's available in print through amazon!)