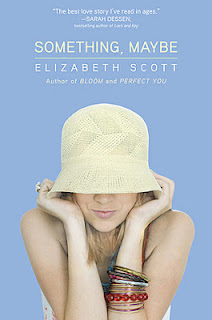 Author: Elizabeth Scott
Series: Stand Alone
Genres: Realistic, Contemporary, Romance, Young Adult
Publisher: Simon Pulse
Released: 24 March 2009
Summary: via goodreads.com Everyone thinks their parents are embarrassing, but Hannah knows she's got them all beat. Her dad made a fortune showcasing photos of pretty girls and his party lifestyle all over the Internet, and her mom was once one of her dad's girlfriends and is now the star of her own website. After getting the wrong kind of attention for way too long, Hannah has mastered the art of staying under the radar...and that's just how she likes it. Of course, that doesn't help her get noticed by her crush. Hannah's sure that gorgeous, sensitive Josh is her soul mate. But trying to get him to notice her; wondering why she suddenly can't stop thinking about another guy, Finn; and dealing with her parents make Hannah feel like she's going crazy. Yet she's determined to make things work out the way she wants—only what she wants may not be what she needs...
My Review: Something, Maybe falls perfectly into the category of “Dessen-esque” as in, this book reminded me a LOT of Sarah Dessen’s work. I loved Sarah Dessen when I was in high school, and usually I’ll pick up her books if I see that she has released a new one. She has a formula, of course, but I love her characters so much that I don’t really care. So, anyways, Something, Maybe felt like her books.
I enjoyed Something, Maybe it was a pretty entertaining read, and Hannah’s voice had that insecure, realistic mood to it as well as that all-encompassing crush on the wrong guy that happens to all of us at least once. You know, the guy all of your friends warn you about. She works in the fast food industry and sometimes she gets to school late. Basically Hannah is the epitome of a “normal” teenager. Except for her family life.
Dysfunctional families are truly what Scott excels at, and Something, Maybe may have been the most dysfunctional of them all. Hannah’s dad is a Hugh Hefner like character with her mother being an Ex-Bunny. Her dad has a television show that is basically a Playboy version of Jersey Shore. I don’t watch enough tv, but I’m pretty sure there was actually a reality show about the man who doesn’t know how to get dressed in normal people clothes.
Anyways, this was actually the one problem I had with Something, Maybe. Hannah is so normal and Finn is a cutie, but it seems strange to me that she can be that normal with a mother and father who literally don’t seem to care about her (and basically just use her throughout the entire book). How do normal kids come out of these warped environments? I feel like this book is definitely more for the older set because in a lot of scenes Hannah’s mother is wearing basically nothing but lingerie. What’s even stranger is that this is a book, in which a major plot line is about the pornography industry, is quite obviously meant for High School and Middle Grade readers.
Although I liked the book, it was fun to see Hannah and Finn fall in love, and Hannah’s personality is one that kept me laughing, plus it’s pretty short, coming in at just over 200 pages, but I was disappointed with that major part of the subject material. Basically, I’m not sure I would want my 13-16 year old daughter reading this (I mean in the future, when I have kids, but still). I mean, I get the YA books are trying to be current on today’s issues, and bring a different focus to things, or whatever. But seriously, what happened to Caroline B. Cooney? I mean, she was awesome.