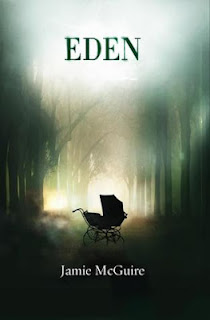 Author: Jamie McGuire
Series: Providence # 3
Genres: Fantasy, Paranormal, Romance, Young Adult
Publisher: CreateSpace
Released: 3 April 2012
Summary: via goodreads.com She had seen the unspeakable.
She would learn the unknowable.
Now, she would fight the invincible.
In the third and final installment of the Providence series, Nina Grey will marry the wrong man, carry the child that was never supposed to be born, and fight a war she can't win.
Faced with the impossible task of protecting his new wife and unborn child against the throes of Hell, Jared Ryel is allowed no mistakes. Pressured to return the Naissance de Demoniac to Jerusalem, he revisits St. Ann's to learn the answers were in front of him all along.
Together, they must survive long enough to let their child save them - and the world
My Review: Wow! Eden perfectly wrapped up this series for me! Such a lovely end to a fun and eventful series! The two minuscule problems I had with Requiem were perfectly accounted for and settled in this one. (Thank heavens for Claire! She and Ryan are perfection.) This series was so much fun to read, and though Jared got progressively over-protective I still felt like it came from a good place, and he didn’t stop Nina from doing what she wanted altogether. The only thing I did have a hard time with was towards the end when Nina has a panic attack. You’ll know what I’m talking about when you get there. It just seemed kind of out of character for her. After everything that happens to her throughout the series, for her to panic and freak out like she does seemed strange. However, she IS pregnant which probably contributes to the strange behavior, and I was kind of waiting for her to crack after everything that had happened to her over the last three years. All in all, this was a great series for summer, fun, fast reads, and I really enjoy McGuire’s writing style, her dialogue and banter is very well thought out and witty, especially the swoon-worthy things that Jared says (cue: the vows holyfreakingcrap) If you liked books that were in the same vein as Twilight and Hush, Hush you will definitely love this series, I know I did.