The Face on the Milk Carton 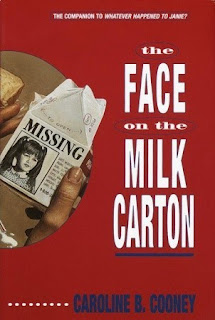 Author: Caroline B. Cooney
Series: Janie Johnson # 1
Genres: Mystery, Middle Grade
Publisher: Random House Children’s Books
Released: 13 April 1996
Summary: via goodreads.com No one ever really paid close attention to the faces of the missing children on the milk cartons. But as Janie Johnson glanced at the face of the ordinary little girl with her hair in tight pigtails, wearing a dress with a narrow white collar--a three-year-old who had been kidnapped twelve years before from a shopping mall in New Jersey--she felt overcome with shock. She recognized that little girl--it was she. How could it possibly be true?
Janie can't believe that her loving parents kidnapped her, but as she begins to piece things together, nothing makes sense. Something is terribly wrong. Are Mr. and Mrs. Johnson really Janie's parents? And if not, who is Janie Johnson, and what really happened?
My Review: Where do I even begin? I remember when I was TA (so long ago!) for the librarian and I stumbled upon this, my first every Caroline B. Cooney book (or as I, in all of my librarian 7th grade glory referred to her as: Carrie B. As in: “hey, have you read this Carrie B. book yet? Best book ever!” – I was a big ole’ nerd, don’t judge ;) I remember sneaking The Face on the Milk Carton into a school-wide assembly and reading it instead of paying attention. Have I always been this big of a nerd, well yeah. You could probably say that. The Face on the Milk Carton was the game changer for me though. It was the first book that I remember reading that was distinctly not what I had deemed a “little kid book.” Books that I loved like Bloomability, and The Music of Dolphins, and From the Mixed Up Files of Mrs. Basil E. Frankweiler, this was not. This girl had a boyfriend. This girl kissed that boyfriend. Holy crap, my seventh grader heart skipped a beat! I would have killed to have Reeve be by boyfriend (never mind that Reeve was, like, six years older than I was – he drove a car and lived next door dang it!) But that wasn’t the only thing that made me love this book, when you’re in junior high you have a tendency to think that everything in your life is awful, so finding your face on a milk carton wouldn’t be so bad. Now, this isn’t where I’m going to rant and rave about the plot and pacing, honestly, this book will probably take you an hour to read, but I will say this. As far as things go, this is a really fun read for girls at the age (around 13-14) the girls that are at the very beginning of jumping into the YA genre. It doesn’t have a lot of depth, and it’s straightforward. The mystery aspect is definitely the strongest plot line, and Carrie B.’s writing style is one that I really love because it reads fast (even in junior high, it read fast – like two days). But I will say this: I loved that Janie was pretty normal, she went to school, ate lunch with her friends, ditched class sometimes, and is legitimately freaked when she finds her face on a milk carton. She knows her next door neighbors, she goes to football games, she worries about getting her driver’s license. She isn’t making out with vampires, being alienated from a crowd for no discernable reason, etc. Janie was literally the every girl. Not the every girl who dated a vampire, or werewolf, she was legitimately normal. Falling in love with people that she had known forever, being friends and eating cafeteria food. I think sometimes we get away from this, don’t get me wrong, I love paranormal romance novels, but for middle school and junior high school kids I think that Carrie B (and a slew of other authors) are often overlooked by educators. For instance: I volunteer at an elementary school (this is true, I’m not making it up for a review – I hang out with sixth graders during the school year) and they have a designated time for reading. Nearly every girl was reading one of the four Twilight books. They’re in sixth grade! That means they’re turning 12! A little young for Twilight, in my opinion (and yes, some were reading Breaking Dawn). Which is why I usually pick up one of these whenever I’m shopping on Amazon, because when I’ve got kids that are that age, I want them to gain what I did from books like this one, and others: That being normal is okay. That wanting that normality, like Janie does, is okay. Sure, Carrie B. writes a lot of different kinds of books, but I have to say, add her name to the E.L. Konisburg, Sharon Creech, Avi, Ann Rinaldi, etc. etc. etc. fan group, because her books are pretty great, they deal with real issues without being too old for their specified age group. The Face on the Milk Carton will forever be one of my favorites, if you haven’t read it yet, I promise it will probably only take you a few hours. And sure, it’s not dense in any way, but it’s fun.

Email ThisBlogThis!Share to TwitterShare to FacebookShare to Pinterest
Labels: Caroline B. Cooney, Five Records, The Face on the Milk Carton