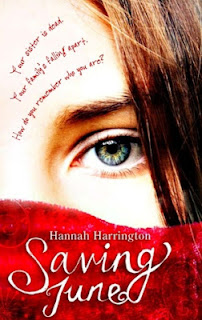 Author: Hannah Harrington
Series: Stand Alone
Genres: Realistic, Contemporary, Young Adult, Romance
Publisher: Harlequin Teen
Released: 1 May 2011
Summary: via goodreads.com ‘If she’d waited less than two weeks, she’d be June who died in June. But I guess my sister didn’t consider that.’
Harper Scott’s older sister has always been the perfect one so when June takes her own life a week before her high school graduation, sixteen-year-old Harper is devastated. Everyone’s sorry, but no one can explain why.
When her divorcing parents decide to split her sister’s ashes into his-and-her urns, Harper takes matters into her own hands. She’ll steal the ashes and drive cross-country with her best friend, Laney, to the one place June always dreamed of going, California.
Enter Jake Tolan. He’s a boy with a bad attitude, a classic-rock obsession and nothing in common with Harper’s sister. But Jake had a connection with June, and when he insists on joining them, Harper’s just desperate enough to let him. With his alternately charming and infuriating demeanour and his belief that music can see you through anything, he might be exactly what she needs.
Except June wasn’t the only one hiding something. Jake’s keeping a secret that has the power to turn Harper’s life upside down again.
My Review: Saving June was everything that I wanted it to be. It stems from one girls need for change and understanding. Lately a lot of YA books seem to deal with death in some way or another and Saving June was no different. Although I’m unsure as to why this current trend is so popular I feel that most authors do tend to focus on the negative aspect which leaves the reader feeling really negatively towards it or at least negatively about it.
Saving June, for me, was not that novel. Although it definitely had it’s moments of sadness it wasn’t overrun with it. It didn’t focus on the negative, if anything Saving June is about the importance of embracing life.
Every character that is introduced on the road trip LOVES being alive. As they share the stories of June and her excitement, and not only that is has an incredible amount of heart as Harper comes to terms with a lot of things. Harrington creates such a great balance between the light and the dark that is a novel about death. She does it in such a way that you feel incredibly hopeful. Not only for Harper and her family, but also with the relationship between Harper and Jake. A relationship that is at once both incredibly beautiful and incredibly heart breaking.
Take Saving June with you on your next road trip, you definitely won’t be disappointed.