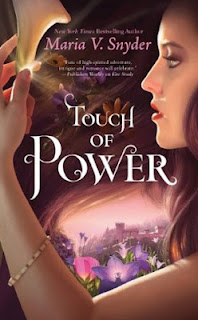 Author: Maria V. Snyder
Series: Healer # 1
Genres: Adult, Fantasy, Romance, Adventure
Publisher: Mira
Released: 20 December 2011
Summary: via goodreads.com Laying hands upon the injured and dying, Avry of Kazan absorbs their wounds and diseases into herself. But rather than being honored for her skills, she is hunted. Healers like Avry are accused of spreading the plague that has decimated the Fifteen Realms, leaving the survivors in a state of chaos. Stressed and tired from hiding, Avry is abducted by a band of rogues who, shockingly, value her gift above the golden bounty offered for her capture. Their leader, an enigmatic captor-protector with powers of his own, is unequivocal in his demands: Avry must heal a plague-stricken prince—leader of a campaign against her people. As they traverse the daunting Nine Mountains, beset by mercenaries and magical dangers, Avry must decide who is worth healing and what is worth dying for. Because the price of peace may well be her life...
My Review: I came to Touch of Power already a big Maria V. Snyder fan. I had read the Study Series and was completely in love with Yelena and Valek, read the Glass series and was a little bit under whelmed (Opal kind of bugged me, mainly because I adored Yelena and everything about her!). So when I heard that she had come out with another novel that was similar, but not a companion book to the Study series, I was intensely excited. (Similar in the fact that they both involved magic, and a ‘realm’…however the idea of healing is kind of introduced in the Study series. Yelena exhibits the same symptoms of healing as Avry does in Magic Study so maybe they are companions? I don’t know, I don’t care, this book was just amazing…am I gushing too much? I am aren’t I?)
Anyways, I’ve been waiting around for an amazing female lead and let me tell you, Avry did NOT disappoint. She was such a strong, clear, and all around great character, especially for a young adult set. Talk about being able to make her own way in the world and choosing things on her own, without coercion from any one else! This girl is the kind of girl that readers can look up to! (finally!) Avry makes her own decisions and really considers all of her options. And of course there is Kerrick, what a great male lead! Not because the relationship between him and Avery is something to write home about (still stuck on Yelena and Valek, don’t judge) but Kerrick is a guy who has quite a bit of honor and determination. He is really loyal, and you see that a lot throughout the novel. Although things between him and Avry are pretty rocky in the beginning, you can tell that they are both doing what they honestly feel is the right thing. The fact that Avry is so defiant when it comes to Kerrick is something that I loved, and that Kerrick is able to see past the cockiness that inhibits him is pretty great too.
Snyder has always impressed me in that she is really good at the craft of writing. She gets the little things from her characters, the little comments, or emotions, or facial expressions that really bring her characters to life for me. The “band of rogues” that Avry ends up traveling with is probably my most favorite group of guys in literature right now (excluding Ari and Janco – but they don’t count as they are a roguish duo and not a band of rogues) the way that they are able to play off of each other as well as their reaction and inclusion of Avry is awesome and incredibly funny. Touch of Power wasn’t without it’s sad moments, and if definitely had some action scenes in it, although I would say it’s what my brothers would call a ‘girl book’ through and through (in that girls like it and boys would probably like it but never admit to reading it) as far as a really great, fun, and exciting read goes I definitely vote for Touch of Power, it is by far one of my favorite books to come out recently and one that I could read over and over again.