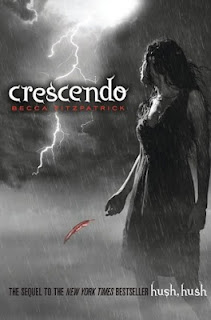 Author: Becca Fitzpatrick
Series: The Hush, Hush Saga # 2
Genres: Paranormal, Supernatural, Romance, Young Adult
Publisher: Simon and Schuster Children’s Publishing
Released: 19 October 2010
Summary: courtesy of goodreads.com Nora Grey's life is still far from perfect. Surviving an attempt on her life wasn't pleasant, but at least she got a guardian angel out of it: a mysterious, magnetic, gorgeous guardian angel. But, despite his role in her life, Patch has been acting anything but angelic. He's more elusive than ever and even worse, he's started spending time with Nora's arch-enemy, Marcie Millar.
Nora would have hardly noticed Scott Parnell, an old family friend who has moved back to town, if Patch hadn’t been acting so distant. Even with Scott's totally infuriating attitude Nora finds herself drawn to him - despite her lingering feeling that he's hiding something.
Haunted by images of her murdered father, and questioning whether her nephilim bloodline has anything to do with his death, Nora puts herself increasingly in dangerous situations as she desperately searches for answers. But maybe some things are better left buried, because the truth could destroy everything - and everyone - she trusts
My Review:  Crescendo, for me, was difficult.  The circumstances that Nora and Patch are put into throughout Crescendo were grating.  Especially after coming off of Hush, Hush where you wait most of the novel for something substantial to happen between our two protagonists.  Which, admittedly is good writing, and was really enticing to read, but that doesn’t mean I wanted to re-read it.  Basically: it was really hard for me to get behind the plot of this novel.  Don’t get me wrong, it’s still the same Patch with his cocky, un-explaining ways, and Nora finally steps up and makes some confident choices about their relationship, which was nice.  Patch is kind of a jerk.  It’s a dominant characterization of the guy, and Nora is still in high school and hasn’t learned her lesson yet, but in Crescendo she stands up for herself for a nanosecond and I was proud of that.
I should probably address, I know that I rag on Patch and Nora, I have such a love/hate relationship with those two!  Fitzpatrick’s writing style is so freaking addicting that even though I see the two in what could only be conceived as a train wreck of a relationship, I still can’t help but read on!  However, what really got to me was this: In Hush, Hush Patch and Nora finish pretty strong.  They’re together, officially, Patch has kind of stopped being such a jerk.  They’re a couple, after dancing around it for a couple of hundred pages, so it bothered me immensely how everything went South between them so quickly.  Also, the “love triangle” seemed too contrived to be truly believable.
I understand star-crossed lovers.  However, I don’t think that the point of a novel about two people in love should be to make me believe that they shouldn’t be together.  By the end of Crescendo, even filled with its witty banter, and addictive writing style, I was beginning to believe that maybe Patch and Nora aren’t really meant for each other after all.  The writing was good, the plot strong, I just didn't like the direction the story was headed in.