Danny Wallace and the Centre of the Universe 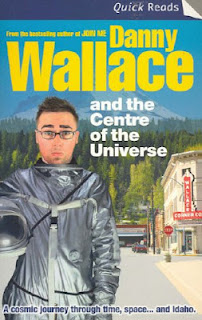 Author: Danny Wallace
Series: Stand Alone
Genres: Autobiography, Travel, Novella
Publisher: Ebury
Released: 1 May 2006
Summary: courtesy of goodreads.com Danny Wallace wanted to write about a place so special and so crucial to our existence that it had never before been tackled: the Centre of the Universe. But then, he realised that getting there might be a problem, and when he did, there'd probably be nothing much to write about. Until, he heard about a manhole cover, on a small street, in a small town, tucked away in a remote part of Idaho. The manhole cover had been declared the Centre of the Universe. The mayor had the science to back it up. The town rejoiced. And the name of the town? Wallace. It was a cosmic coincidence Danny couldn't resist...
My Review:  One of my most favorite people in the entire universe is a massive fan of Danny Wallace, and when she gave me this little novella to read with the promise of a LOT of laughs and not being disappointed it, I jumped.
This book is such a fun, quick, and hilarious read.  Danny Wallace is so endearing and wonderful as a narrator, and the things that happen to him whilst on this journey to the centre of the universe is pretty incredible.  Honestly, it is one of the most fun books I have ever read.  It made me want to be best friends with Danny Wallace, or at the very least make the journey to Wallace, ID to find my zen and center or whatever.  (Could I be given the keys to the city or a coin or two perhaps?)
This is definitely not my end with Danny Wallace, I plan to read all of his other books so be prepared for reviews on those sooner or later...
Seriously, amazing, amazing, amazing, fun, and amazing.  I need to go and find this guy on twitter, I’ll bet his tweets are incredible.  Meanwhile: read this book!

Email ThisBlogThis!Share to TwitterShare to FacebookShare to Pinterest
Labels: Danny Wallace, Danny Wallace and the Centre of the Universe, Five Records