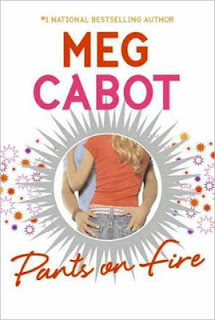 Author: Meg Cabot
Series: Stand Alone
Genres: Contemporary, Humor, Romance, Young Adult
Publisher: Harper Teen
Released: 1 May 2007
Summary: courtesy of goodreads.com Katie Ellison is not a liar.
It's just that telling the truth is so . . . tricky. She knows she shouldn't be making out with a drama club hottie behind her football-player boyfriend's back. She should probably admit that she can't stand eating quahogs (clams), especially since she's running for Quahog Princess in her hometown's annual Quahog Festival. And it would be a relief to finally tell someone what really happened the night Tommy Sullivan is a freak was spray-painted on the new wall outside the junior high school gymnasium—in neon orange, which still hasn't been sandblasted off. After all, everyone knows that's what drove Tommy out of town four years ago.
But now Tommy Sullivan has come back. Katie is sure he's out for revenge, and she'll do anything to hang on to her perfect (if slightly dishonest) existence. Even if it means telling more lies than ever. Even if, now that Tommy's around, she's actually—no lie—having the time of her life.
My Review: Does anyone write novels the way Meg does? She takes such a simple idea and infuses it with so much heart that it’s nearly impossible to like what comes out on the other side.  Katie is such a funny heroine, and although Meg is taking a pretty heavy topic (liars and cheaters) she somehow turns it into something light an funny when it comes to Katie’s perspective on things.  It’s the classic story of trying to be something you aren’t and then that one special person who makes you realize who you truly are.
It’s such a fun book for girls who are at that age where everything feels likes it changing and moving on without you.  By the end of this novel Katie has come to better understand herself, and her friends.  She’s realized what it means to be a good friend, and she is light and funny and heartfelt.
Out of all of Meg’s books for Young Adults, Pants on Fire is one of my favorites. And it literally defines summer story/beach read.  In that the novel takes place in a beach community during the summer.  The plot is light, the writing is witty, take this one on your next road trip with your girlfriends and you won’t be disappointed.