For Darkness Shows the Stars 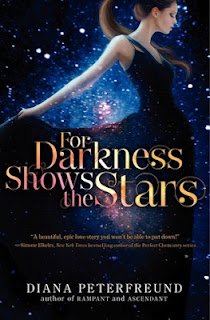 Author: Diana Peterfreund
Series: Stand Alone (with a prequel)
Genres: Dystopia, Science Fiction, Re-telling, Young Adult
Publisher: Blazer + Bray
Released: 12 June 2012
Summary: via goodreads.com It's been several generations since a genetic experiment gone wrong caused the Reduction, decimating humanity and giving rise to a Luddite nobility who outlawed most technology.
Elliot North has always known her place in this world. Four years ago Elliot refused to run away with her childhood sweetheart, the servant Kai, choosing duty to her family's estate over love. Since then the world has changed: a new class of Post-Reductionists is jumpstarting the wheel of progress, and Elliot's estate is foundering, forcing her to rent land to the mysterious Cloud Fleet, a group of shipbuilders that includes renowned explorer Captain Malakai Wentforth--an almost unrecognizable Kai. And while Elliot wonders if this could be their second chance, Kai seems determined to show Elliot exactly what she gave up when she let him go.
But Elliot soon discovers her old friend carries a secret--one that could change their society . . . or bring it to its knees. And again, she's faced with a choice: cling to what she's been raised to believe, or cast her lot with the only boy she's ever loved, even if she's lost him forever.
Inspired by Jane Austen's "Persuasion", "For Darkness Shows the Stars" is a breathtaking romance about opening your mind to the future and your heart to the one person you know can break it.
My Review: First I must admit: I'm not a massive Jane Austen fan. I've always considered myself more of a Bronte sisters girl. I just like the intensity that the Bronte sisters deliver, whereas I feel like Austen focuses more on the social customs of the age and not on the relationship of the two people. So, take from that what you will (and please don't kill me!) All of that said, For Darkness Shows the Stars was very...interesting. Beyond the completely lovely title, Peterfreund has woven together a tale that is at once both agonizing and incredibly beautiful as the original tale (Jane Austen's Persuasion) from which she draws.
Elliot and Kai are characters defined and constrained by their respective birthrights. Both independent and strong minded characters. It is for this reason that the novel can become so agonizing. Kai and Elliot don't know how to freaking talk to each other. What? Come on my peeps! We all know that you are in love, so just say it. Because this beating around the bush nonsense it really ticking me off.
The world that Peterfreund creates is also pretty fantastic, incorporating a whole new dystopia and making it her own. The place that Peterfruend has created is such a beautiful and desolate place. For some reason I was thinking the Caribbean, but having the North estate be literally up North and a little colder. I don't know, it worked in my head though. Also, the main reason why Elliot becomes so disgusted with Kai was both terrifying and electrifying. There were so many layers to this story. I've honestly never felt so close to these characters, maybe it's because there were so many times where I wanted to reach in and shake some sense into them (just like when I read Jane Austen). My heart broke for Elliot and Kai.
The story itself is, obviously, incredibly well written with fantastic characters and relationships all around. Still, watching Elliot and Kai do a sort of dance around each other verbally, and for Kai to try and hurt Elliot the way in which he does was really hard for me to understand. Why don't people just say what they mean and mean what they say? The only thing I can recommend besides to read this book because it's lovely, is to read it over a long time period, that way you don't want to chuck your book (or e-reader) across the room whenever one of the characters doesn't say what they mean.