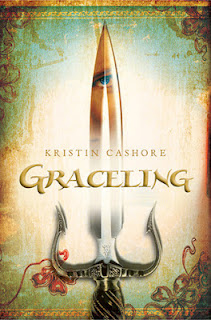 Author: Kristin Cashore
Series: Graceling Realm # 1
Genres: Fantasy, Adventure, Action, Romance, Young Adult
Publisher: Houghton Mifflin Harcourt
Released: 1 October 2008
Summary: courtesy of goodreads.com Katsa has been able to kill a man with her bare hands since she was eight—she’s a Graceling, one of the rare people in her land born with an extreme skill. As niece of the king, she should be able to live a life of privilege, but Graced as she is with killing, she is forced to work as the king’s thug.     When she first meets Prince Po, Graced with combat skills, Katsa has no hint of how her life is about to change. She never expects to become Po’s friend. She never expects to learn a new truth about her own Grace—or about a terrible secret that lies hidden far away . . . a secret that could destroy all seven kingdoms with words alone.
With elegant, evocative prose and a cast of unforgettable characters, debut author Kristin Cashore creates a mesmerizing world, a death-defying adventure, and a heart-racing romance that will consume you, hold you captive, and leave you wanting more
My Review: Is there anyone that doesn’t or hasn’t enjoyed this book? What an excellent fantasy novel! Cashore creates such a wonderful, excellent, intricate, and beautiful world filled with incredible characters.  Seeing this world through Katsa’s eyes is so unlike anything I have ever read before.  Her personality is so unique and modern which I wasn’t expecting.
Katsa and Po are such wonderful main characters, the way that they interact with each other is again, so modern.  Katsa’s dominant personality alongside Po’s understanding and gentle one gives such an amazing dynamic to the story.  They are such a perfect match for each other.
The supporting characters in Graceling also add so much fun and flair to the story.  From Katsa’s band of men who travel with her (one of my favorite band of rouges, second only to Touch of Power) as well as her cousin and his crazy ideals and inventions.  There are so many things that I loved about this book; the idea is so original and well thought out, and then well written.  I didn’t want this to end!
I will make one comment on the ending though: I enjoyed it.  I felt like the entire story lent itself to the ending, and although it wasn’t necessarily a traditional ending, I feel like it was a perfect one nonetheless.