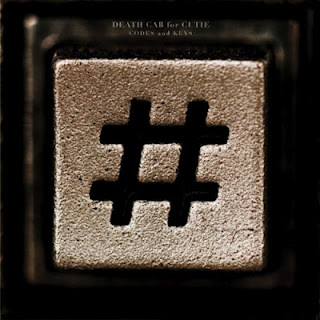 Album: Codes and Keys
Genre: Alternative Rock
Label: Atlantic
Released: 5 April 2011
My Review: I’ll admit, I feel like I’ve been a Death Cab for Cutie fan for ages, and then I realize how long they’ve been a band and know that there are a lot of Death Cab fans out there that have been fans for a lot longer, and who know a lot more about them than I do.  Still, I’m pretty sure they are one of the coolest bands in the entire universe, and if we’re still sending shuttles with various things from earth into space or whatever to tell the aliens we come in peace, I vote we send a Death Cab album up, because they are that cool. (at least, I think that’s cool)
Anyways. What I love most about Death Cab is their sound.  No one can sound like Ben Gibbard and the boys. If you play their albums back to back there isn’t a lot of deviation from their original sound, which to me embodies the Pacific Northwest at this point, and I LOVE that.  So many times today bands think it best to complete veer away from their original sound in an effort to make themselves new again, but sometimes I wonder if it looses them as many fans as it gains, whereas Death Cab will always have the die hards, even new fans can listen to their older stuff and not be completely thrown off by it.  Codes and Keys is amazing because not only will it lyrically appeal to new fans, but it appeals to all of their old fans as well.  Lyrically Codes and Keys is a little different from its predecessors, but it still has the ambiance of the Death Cab I know and love.  Spend your weekend taking it in.