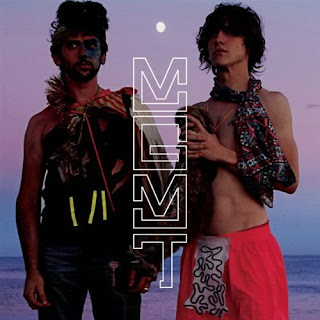 Album: Oracular Spectacular
Genre: Indie, Electonica, Lo-Fi
Label: Sony
Released: 22 January 2008
My Review:  Does any album embody summer better than MGMT’s debut?  Every single track is reminiscent of summer nights for me.  And since we are in the height of summer, I recommend finding this baby on Spotify and than repeating it shamelessly.  In comparison to their Sophomore effort of Congratulations, MGMT’s lyrics on OS are a lot more mellow, and their sound is a lot more mainstream (though to be fair, this album brought back into the mainstream a grunge/techno/lo-fi beat that hadn’t been heard in a few years).  However, because it IS a techno/electronica record it is one of very few albums that I absolutely adore where the adoration isn’t found in the lyrics.  Nope, not here.  The truly amazing thing about MGMT is their sound.
After OS, the sound that MGMT created kind of blew up, although it had been lying somewhat dormant in the discos of Europe and the clubs on the coasts, this album really brings out an incredible beat.  Their sound effects are also hilarious and add a sense of joking to the album that the lyrics do seem to back up.
I definitely recommend this for your mid-July pool party, or at the very least, add some of these tracks to your summer Spotify mix, or your iTunes dj, just until the weather turns cold.