On the Jellicoe Road 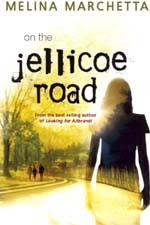 Author: Melina Marchetta
Series: Stand Alone
Genres: Realistic Fiction, Mystery, Romance, Young Adult
Publisher: HarperTeen
Released: 28 August 2006
Summary: courtesy of goodreads.com  I'm dreaming of the boy in the tree. I tell him stories. About the Jellicoe School and the Townies and the Cadets from a school in Sydney. I tell him about the war between us for territory. And I tell him about Hannah, who lives in the unfinished house by the river. Hannah, who is too young to be hiding away from the world. Hannah, who found me on the Jellicoe Road six years ago.
Taylor is the leader of the boarders at the Jellicoe School. She has to keep the upper hand in the territory wars and deal with Jonah Griggs - the enigmatic leader of the cadets, and someone she thought she would never see again.
And now Hannah, the person Taylor had come to rely on, has disappeared. Taylor's only clue is a manuscript about five kids who lived in Jellicoe eighteen years ago. She needs to find out more, but this means confronting her own story, making sense of her strange, recurring dream, and finding her mother - who abandoned her on the Jellicoe Road.
My Review:  On the Jellicoe Road was one of the books where I had heard about how fantastic it was for quite a long time, but I had never gotten around to reading it.  To be honest, it was because everyone loved it that I kind of put off on reading it for a while, I was afraid of being too influenced by everyone else’s opinions.  Needless to say there was nothing to be afraid of.  Jellicoe Road is one of those books that affects you.  You know?  Like The Fault in Our Stars, or that first Sarah Dessen. The writing is so brutally honest, and so beautiful that you have no choice but to let it worm its way into your heart.  That is how Jellicoe Road felt to me.  Like it had its own life force, and I just got to hang out in it for a little while.  I’m so glad that there are authors out there that have written books about life.  About how hard some things can be to deal with, and about how you have to be a little bit crazy to get through it.
The only thing I had a hard time with was this: so much time is spent discussing the territory wars at the beginning of the book that I started to get bored.  Especially when I considered that those pages and words could have gone towards the development of the main (present day) relationship, which felt kind of like when you drive clutch for the first time, skippy and then suddenly smooth (the relationship, I mean.  Not the entire book).
The interwoven story lines was incredibly interesting, and the story that Hannah has written broke my heart.  There really aren’t any words to express how much this book affected me, as a matter of fact I’m still dealing with it.  It wasn’t one of those “I’m so happy right now because I read this book.” It’s more of a “think about it consistently trying to figure it out” kind of books.  There isn’t much of a feel-good quality about this, but there is a realism that I haven’t found in YA in a long time. (Which makes a little bit of sense seeing as this was written years ago, before the paranormal and supernatural YA boom).