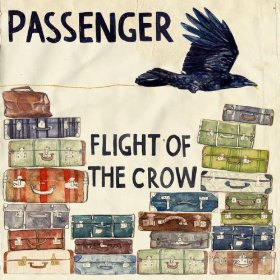 Album: Flight of the Crow
Artist: Passenger
Genre: Folk
Label: Passenger
Released: 24 September 2010
My Review: So, recently I’ve been recommending albums that kind of signify summer for me, and this is definitely one of those albums.  I came across Passenger whilst listening to Communion’s Flowerpot Sessions (which are incredible, you should definitely find them on spotify or grooveshark.)  There is kind of a Bob Dylan aspect in his lyrics, in that I think they kind of define Australian music the way Dylan did with the American Midwest.  There is also something about an album filled with duets.  Every song sounds a little bit different from the last and every artist that Passenger collaborated with provides an excellent contrast to him.  The songs have a little bit of a fairy tale quality about them, and they kind of encompass something.  Some sound like you would listen to them at the beach, others sound like you would listen to them while camping in the bush.  I don’t know a lot about Australia, but I think that if an album were going to capture the various sounds and cultures that make up that amazing continent, than Passenger would come pretty close to doing so.

Email ThisBlogThis!Share to TwitterShare to FacebookShare to Pinterest
Labels: Flight of the Crow, LP Saturday, Passenger