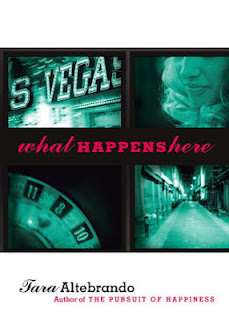 Author: Tara Altebrando
Series: Stand Alone
Genres: Travel, Contemporary, Horror, Young Adult
Publisher: MTV Books
Released: 6 May 2008
Summary: via goodreads.com We were going to see the world together, Lindsay and I. We were going to eat it up, whole. But it didn't happen that way. It didn't happen that way at all.... When Chloe's parents decide to take her to Europe the summer before senior year of high school, she's ecstatic...she only wishes her best friend, Lindsay, could come too. Living in Las Vegas, they have long imagined the world through the casinos inspired by great cities and have vowed to travel the globe together someday. Unfortunately, Lindsay's parents won't agree to send her along. So Chloe goes to Europe and sends postcards to Lindsay every day. But when she comes home, she must cope with shocking news that rips her family -- and Lindsay's -- apart. And as she tries to uncover the truth about what happened, Chloe soon begins to feel that Lindsay's brother, Noah, is the one person alive for whom she'd go to the ends of the earth.... From the acclaimed author of The Pursuit of Happiness, this is a stunning new novel of friendship, love, and loss, set against the dazzling dual backdrops of Europe and Las Vegas.
My Review:  Wow, What Happens Here blew my mind, and I’m still trying to figure out if it was in a good way or a bad way.  The subject material just felt so heavy.  You know what I mean?  I’ve read Altebrando’s past books, and all of them deal with grief over the death of a loved one in some way or another, so that part I was expecting, but there was something about What Happens Here that was just so dang intense.  Although I have to admit, I enjoyed the mystery aspect, and Chloe’s yearning to still be the best friend she can for Lindsay.  The Chloe/Noah intrigue was a little hot and cold, but I felt that it reflected back on the tone of the novel well, so it wasn’t incredibly bothersome.  As a matter of fact that bothersome thing for me was Lindsay’s death.  It’s told in snippets and through the surveillance cameras of Vegas, and though I liked the surveillance camera aspect of it, like I really really liked that aspect of it, I felt that it was pushed too much to the background of the novel, bringing mindless conversations to the foreground.  Altebrando has a really unique voice as far as writing is concerned, and in other novels of hers I have really enjoyed that.  She has a way of connecting with readers that are the same age as her protagonists.  However, with What Happens Here I was in a constant debate: Is this a mystery novel, of a best friend and an older brother trying to find justice for a girl that was killed, or is it a novel about a girl trying to find her identity after her best friend is gone?  Normally both of these plot lines could work really well together, but I felt that combining this with the European vacation and all of the family drama just made it into too much to handle.  Especially when the length of the book is taken into account, there just wasn’t enough time or words to explain everything justly, and that is why I had a harder time with this one than I’ve had with other of Altebrando’s works.  It was good, just not great.