LP Saturday: Noah and the Whale 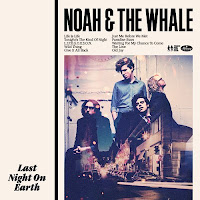 Album: Last Night on Earth
Artist: Noah and the Whale
Genre: Folk/Indie/Rock
Label: Island Mercury
Released: 15 March 2011
My Review: This album was one of the most played albums on my iPod in 2011. I listen to a lot of British Radio (Radio 1 and 6Music) and I heard L.I.F.E.G.O.E.S.O.N for the first time towards the end of 2010, and I was instantly hooked. When I found out that they came from the same place (literally) as some of my favorite artists I was that much more intrigued. For the record, I know that last week's LP Saturday was a little bit (like WAY) too long for most people, so from now I'm keeping it short and sweet and simple. Because let's face it, I didn't even want to read back through what I wrote last week. So, short and sweet on why I adore this album, and it's worth taking a weekend to listen to it. Last Night on Earth is such a catchy album, more so than the two previous works from NATW. Or maybe it sounds a little bit more American than the other. Regardless, this record has a bigger sound that it's predecessors, which is one of the big reasons why I adore it. This album sounds like summer. It sounds like you need to sit on the back porch and drink some lemonade and soak in some rays. There is also so much hope on this album, so much that has yet to be said. Noah and the Whale have captured what it feels like to be at that growing up age musically that some novelists have achieved in literary works. If you read about the album you find that they recorded in Venice Beach which I definitely think lends to the overall tone and sound, as well as the fact that Charlie Fink (the lead singer, and songwriter) was watching a lot of Twin Peaks at the time he was writing the album, both of which are heavy inspirations and can be felt throughout a lot of tracks on the album. If your looking for something hipster, I'm pretty sure that these guys invented hipster. With their style and their videos...well, I'll just show you.

Email ThisBlogThis!Share to TwitterShare to FacebookShare to Pinterest
Labels: Last Night on Earth, LP Saturday, Noah and the Whale