Stolen: A Letter to My Captor 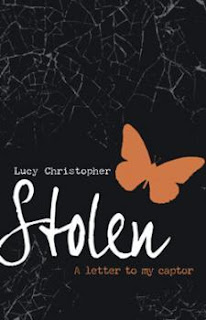 Author: Lucy Christopher
Series: Stand Alone
Genres: Contemporary, Realistic Fiction, Romance, Young Adult
Publisher: Chicken House Ltd.
Released: 4 May 2009
Summary: courtesy of goodreads.com It happened like this. I was stolen from an airport. Taken from everything I knew, everything I was used to. Taken to sand and heat, dirt and danger. And he expected me to love him. This is my story. A letter from nowhere.
Told in a letter to her captor by 16-year-old Gemma, Stolen explores the influence that a really wild and remote space can have on the inner development of a young woman.
Gemma, a British city-living teenager, is kidnapped while on holiday with her parents. Her kidnapper, Ty, takes her to the wild land of outback Australia. To Gemma’s city-eyes, the landscape is harsh and unforgiving and there are no other signs of human life for hundreds of kilometres in every direction. Here, there is no escape. Gemma must learn to deal with her predicament, or die trying to fight it.
Ty, a young man, has other ideas for her. His childhood experience of living in outback Australia has forever changed the way he sees things. But he too has been living in the city; Gemma’s city. Unlike Gemma, however, he has had enough. In outback Australia he sees an opportunity for a new kind of life; a life more connected to the earth. He has been watching and learning about Gemma for many years; when he kidnaps her, his plan finally begins to take shape.
But Ty is not a stereotypical kidnapper and, over time, Gemma comes to see Ty in a new light, a light in which he is something more sensitive. The mysteries of Ty, and the mystery of her new life, start to take hold. She begins to feel something for her kidnapper when he wakes screaming in the night. Over the time spent with her captor, Gemma’s appreciation of him develops …but is this real love, or Stockholm Syndrome
My Review: Stolen was another one of those books that really makes you think.  I hadn’t thought or really studied Stockholm Syndrome at all before pulling this book of the shelf.  Needless to say this book was a very interesting introduction.  Stolen in my opinion, was written in such a way where you feel like you know 100% exactly what is going on, and at the same time you’re not really getting all of the story.
Ty and Gemma are both such well written characters, and so multi-dimensional.  The way that this is constructed, as a letter using “you” instead of “Ty”, the sincerity in Christopher’s prose which is heart wrenching, and the way that the Sandy Desert and the compound are described, are what truly makes this a landmark novel in young adult literature.
Everything in Stolen is so intense.  White-knuckles intense.  Not in an action/adventure sort of way, but in an adrenaline constantly surging through your veins kind of way.  As a reader I became so torn, hating what Ty was doing, and yet yearning to see a good side in him.  And the more I thought about it, the more I realized.  A LOT of YA paranormal books do this (clarification: this is NOT paranormal whatsoever, but I’m drawing a conclusion) not Stockholm syndrome, but getting you to root for the bad guy.  Because thinking about it, Ty IS a bad guy.  A really bad guy, and I understood that because he had the label of “kidnapper” and not “super hot sexy guy” like so many other YA male protagonists are labeled. (which isn’t a diss, actually I love reading those books, they’re some of my favorite forms of escape, I’m just trying to make sense of this book too…)  *sigh* I digress.
This novel makes you think, that’s for sure.  And it is really well done.  I’m not sure that I’ll find another book about Stockholm Syndrome that is quite as well thought out as this one, definitely not your average weekend read.  I’m giving it four (I know, FOUR? After you just RAVED about it?!) because some of the scenes were just a little bit too intense for my taste.  It left me wondering what the heck was going on, and feeling slightly dizzy, which is awesome, but kind of strange and terrifying at the same time.

Email ThisBlogThis!Share to TwitterShare to FacebookShare to Pinterest
Labels: Four Records, Lucy Christoper, Stolen A Letter to My Captor