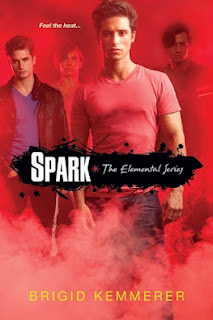 Series: Elementals # 2
Genres: Paranormal, Fantasy, Young Adult
Publisher: K-Teen
Released: 28 August 2012
Summary: courtesy of goodreads.com Gabriel Merrick plays with fire. Literally.
Sometimes he can even control it. And sometimes he can’t. Like the fire that killed his parents.
Gabriel has always had his brothers to rely on, especially his twin, Nick. But when an arsonist starts wreaking havoc on their town, all the signs point to Gabriel. Only he’s not doing it.
More than Gabriel’s pride is at stake -- this could cost him his family, maybe his life. And no one seems to hear him. Except a shy sophomore named Layne, a brainiac who dresses in turtlenecks and jeans and keeps him totally off balance. Layne understands family problems, and she understands secrets. She has a few of her own.
Gabriel can’t let her guess about his brothers, about his abilities, about the danger that’s right at his heels. But there are some risks he can’t help taking.
The fuse is lit…
My Review:  Wow, okay, well . . . give me a moment while I dig myself out of the hole I buried into.  If you’ve read my reviews (or really, just read my review of Storm) you’ll know that I wasn’t the biggest fan of these books.  Or at least, that book. Seriously.  I basically hated it.  It wasn’t so much something against the idea of the book, as it was against all of the crappy things that happen to the main character in the book.  I really felt bad for her, and the things that happened to her were never-ending, intense, and pretty dark for a YA novel (in my opinion). Spark, though.  Spark was pretty fantastic.
Here is what I loved:  the miscommunication (not joking) here’s a fact: guys don’t like to communicate, they don’t like to talk about their feelings, and they make rash decisions once in a while.  The way that the Merrick brothers act and react to each other I felt like was so honest to how males react.  I also loved how Gabriel completely embodied his element.  With Storm things seemed more vague, less cemented with Chris, but in Spark the characterizations were stronger.  This may be because Gabriel has a lot more issues than the rest of his brothers (maybe not Michael, but definitely Chris and Nick) and he deals with them in a really honest way.
I also really enjoyed Layne.  She felt a little bit like Becca, in the fact that her family life sucked majorly, but the way that she reacted to it wasn’t with a forced sense of optimism like Becca.  With Layne and Gabriel I felt like they really balanced each other out.  There were still the cringe worthy moments when it came to groups of teenagers.  (Seriously, cringe worthy – why are teens so freaking mean?  I don’t remember them being this mean . . .)  There were some points that played out like an ABCFamily movie, but as far as characterization, plot structure, and the central love story this one was a lot stronger than Storm (in my opinion).  The only thing that I was kind of bothered with was that there wasn’t any resolution with Chris and Becca.  The entire story focuses solely on Gabriel and Layne, so it makes me wonder if there will be another Chris and Becca book.  I’m sure that it says on a fan board somewhere, but I’m too lazy to look it up.  I want a full new adult Michael story.  That’s what I want. (Nick is kind of a boring straight arrow, let’s be honest.  What fun hot sexy brother things does he have to bring to the table?)  More Gabriel, more Michael.  They’re my favorite brothers.