LP Saturday: The King is Dead 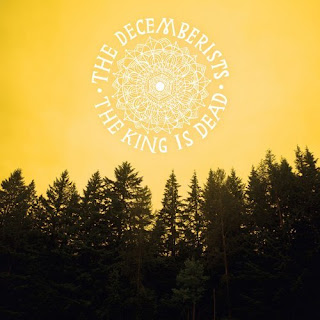 Album: The King is Dead
Artist: The Decemberists
Genre: Indie Folk
Label: Capitol
Released: 18 January 2011
My Review: I realize that The King is Dead came out a while ago, but it is still one of my favorite albums, and The Decemberists are at the top of my “favorite artists” list.  I’ve got all their albums and I go into obsessive listening phases of their music probably seven or eight times a year, where all I want is all The Decemerists all the time.  They have such an intense quality about their lyrics that I latch on to.  Not to mention they’re songs all tell such excellent stories.  Kicking the album off with Don’t Carry it All really captures what this album is about for me: change.  Changing seasons, changing periods in life, change period.  Which is why I feel like this is such a great Fall/Winter album.


The first single was Down By the Water, which is also the most mainstream song on the album, in my opinion.  I got the chance to see these guys live last year, and they were so fantastic and wonderful that I ended up liking them even more than I did before.  My favorite track from this album is Rox in the Box.  Enjoy.

P.S. Has anyone read Wildwood (The Wildwood Chronicles)? It's written by the lead singer of this band but I haven't gotten around to it yet. . .

Email ThisBlogThis!Share to TwitterShare to FacebookShare to Pinterest
Labels: LP Saturday, The Decemberists, The King is Dead