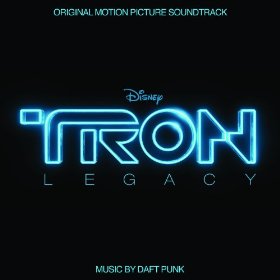 Artist: Daft Punk
Genre: Futuristic Pop, Soundtrack
Label: Walt Disney Records
Released: 7 December 2010
My Review:  Here’s something to think about: when a soundtrack is written and performed by Daft Punk, the argument can be made that said soundtrack is going to be incredible.  Why?  Because Daft Punk is pretty darn incredible.  I will admit, I hadn’t heard  of the TRON franchise until I saw TRON Legacy a few weeks ago, and I have to say; Disney could not have found a better team to write the music for this film than Daft Punk.  Daft Punk embodies the futuristic setting of TRON, as artists, they are the only group I would have ever given thought to existing in the world of TRON, and the soundtrack reflects that.  There are elements of previous Daft Punk songs on this soundtrack, especially on track 3 Son of Flynn (which is my personal favorite), but the band is also able to build and reform to the needs dictated in a cinematic soundtrack.
There have been a lot of bands who have either written songs for films, or written the score for a film, it’s becoming more and more popular for artists to do that, however I haven’t heard anything like TRON before.  There are equal elements Daft Punk and traditional Disney score.
What I’m saying is: this is just as much of a Daft Punk album as it is a Walt Disney Soundtrack.  They are able to balance between the two perfectly, which is why a love it.  This movie is so streamlined, everything in it reflects the soundtrack.  Soundtracks have the ability of being mere background noise or of adding intensely to the overall feeling of the film.  Without Daft Punk, I doubt TRON Legacy would have been the film it was (and it was AWESOME.)
Posted by E at 12:22 PM