I've been wanting to do this Movie VS Book thing for a while.  When I was co-authoring a previous blog I used to do it almost every week, but then venturing out on my own made it a little harder to pick up everything I had been doing.

Anyways, we're settled in now.  We're good.  So I'm going to start doing Movie VS. again as a little treat on my favorite day of the week! (Thursday)

I had never heard of the book The Death and Life of Charlie St. Cloud by Ben Sherwood, much less read it, but Zac Efron was slated to star in the film; and Zac Efron is, well. Yeah.  It looked like the typical "rip your heart out, full of sadness and drama" film. It was, definitely, but there was more to the story than that.

The book by Ben Sherwood (which I did actually read after seeing the film) had some minor differences.  For one, Charlie was quite a bit older in the book, it was set on the opposite coast, and the baseball elements in the book were overlooked significantly in the film, the big reveal was handled quite a bit better in the book (in my opinion) only because it is so much harder to handle that kind of situation visually.  I felt, however, the internal dialogue of the main character, his relationship with the ER attendant who brought him back to life, the people he works with, his job, his relationship with his brother, and his relationship with sailing were equally matched in both book and film.

The overall tone of the book and movie, were the same.  Both deal with the power loss has to change you, and the ways someone can accept loss, coping mechanisms, and the power love has to bring you back form the edge.  I think in the world we live in there is the idea that teenagers have an over-idealized view of love, but I think the same can be said for adults, that adults under value the power of love.  Not fleeting love, but love true and sure, deep and abiding, unbreakable love.  Don't get me wrong, The Death and Life of Charlie St Cloud isn't a romance, (at least not to me) it is a story about how someone can be so changed by loss that the only thing which can bring them back from the edge is unconditional love.

I absolutely enjoyed both the book and the film for different reasons.  The book deals with things so resolutely, so perfectly, but I had a hard time dealing with old Charlie, whereas the film is visually beautiful, and the overall tone of both the film and the novel are really driven home on screen. 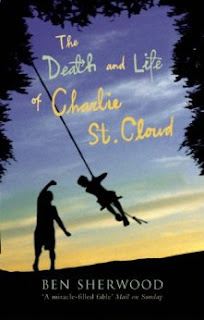 Both were fantastic, and I felt like, overall, they matched up pretty well.