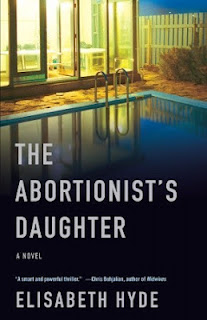 Author: Elisabeth Hyde
Series: Stand Alone
Genres: Mystery, Realistic, Romance, Adult
Publisher: Vintage
Released: 12 June 2007
Summary: via goodreads.com Two weeks before Christmas, Diana Duprey, an outspoken abortion doctor, is found dead in her swimming pool. A national figure, Diana inspired passion and ignited tempers, but never more so than the day of her death. Her husband Frank, a longtime attorney in the DA’s office; her daughter Megan, a freshman in college; the Reverend Stephen O’Connell, founder of the town’s pro-life coalition: all of them quarreled with Diana that day and each one has something to lose in revealing the truth. Meanwhile the detective on the case struggles for the answers — and finds himself more intimately involved than he ever could have imagined.
My Review: Ah, The Abortionist’s Daughter. I was actually recommended to this book by a friend of mine who said that it was the perfect summer read. I don’t know that I would classify it into the “summer read” category, but there was definitely something very magnetic about Hyde’s writing style that I really enjoyed. The murder mystery, the romance, and the family struggle all fit together really well. Hyde kept me guessing which doesn’t normally happen when I read books, granted I haven’t read a lot of mysteries, but still.
I feel like this novel held up to what my friend said, in that it was a read that didn’t have too much depth too it, it wasn’t rocket science, although the subject material was rather dark. However, I definitely recommend it to adults. There are quite a few F bombs, and the material isn’t something that I would really consider appropriate for a younger set. (Mother murdered, crazy ex-boyfriend, hot shot lawyer, down and out cop dad, and the daughter that is just as lost and confused as everyone else – plus it talks at length about abortion’s, so…definitely for the older set).