The Year of Secret Assignments 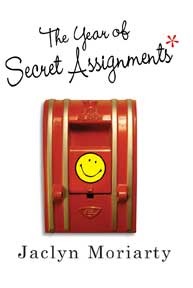 Author: Jaclyn Moriarty
Series: Ashbury/Brookfield Book # 2
Genres: Young Adult, Humor, Contemporary
Publisher: Scholastic
Released: 1 April 2005
Summary via bn.com Three Aussie girls become pen pals with three guys at another school in this delightful, high-spirited read. Told entirely through letters, diary entries, emails, and other writing, Moriarty's novel introduces us to Emily, Lydia, and Cassie -- all students at Ashbury High -- who begin writing to their Brookfield High counterparts through the schools' organized pen pal project. Readers learn quickly that each girl has her own writing style and that at two of the Brookfield boys (Seb and Charlie) seem to be smitten with Lydia and Emily. The only trouble is Cassie's pen pal, Matthew, a shady character who first sends her short, threatening letters and then becomes strangely sweet toward her. Nobody can figure out why Cassie keeps writing to him, but after she has a crushing meet-up with Matthew, Cassie discovers -- with the help of her friends and the Brookfield guys -- that he hasn't been honest about his identity. All could be ended there, but when Charlie helps take revenge and Brookfield High gets mysteriously vandalized, the group comes together to deliver justice and save the endangered pen pal project.
My Review: Feeling Sorry for Celia was one of my favorite books growing up. However, I haven’t read it in a while and I just read this one last week, so I feel better equipped to write about The Year of Secret Assignments. Maybe one day when I dig Celia out of my box of books (don’t be misled, there are, in actuality, many boxes full of my books) than I will write a review on it, but for now: Secret Assignments gets the honor instead.
The Year of Secret Assignments is, in a word: amazing. I’ve read books before in which everything is told through letters, e-mails, diary entries and at times they feel a little contrived, like say when the main character is feverishly writing in her diary whilst on a date or taking a cab or something (utter nonsense). The Year of Secret Assignments is NOT that, it leaves you to make up what happens in between letters. Moriarty has a wonderful sense of humor that shines in her books. They are, by far some of the funniest pieces of literature I have ever read for young adults. Although the characters sometimes seem very stock-ish (and almost interchangeable with one another) the plot line moves forward quickly and all of the characters get their turn in the spotlight. It is such a fun, quick read. And it’s Australian, if you’re into that sort of thing.