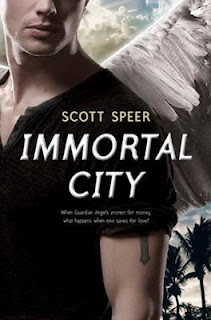 Author: Scott Speer
Series: Immortal City # 1
Genres: Paranormal, Romance, Adventure, Young Adult
Publisher: Razor Bill
Released: 3 April 2012
Summary: Jackson Godspeed is the hottest young Angel in a city filled with them.
He's days away from becoming a full Guardian, and people around the world are already competing for the chance to be watched over by him. Everyone's obsessed with the Angels and the lucky people they protect - everyone except for Madison Montgomery.
Maddy's the one girl in Angel City who doesn't breathlessly follow the Angels on TV and gossip blogs. When she meets Jackson, she doesn't recognize him. But Jackson is instantly captivated by her, and against all odds the two fall in love.
Maddy is swiftly caught up in Jackson's scene, a world of glamour, paparazzi - and murder. A serial killer is on the loose, leaving dead Angels' wings for the police to find on the Walk of Fame. Even the Guardians are powerless to protect themselves in the face of this threat & and this time it's up to Maddy to save Jackson
My Review: I don’t know why, but as I was reading this I got the distinct impression that it was written to that Foster the People song “Pumped Up Kicks” No joke. Every time Jacks was headed to an event I had the first few chords of that song begin to run through my brain. Anyways, that’s not really the point. Immortal City is a good idea. I like the idea, I had high hopes for the idea. Hot super star angel falling for a mortal? I’ll take that for a light read! Sure had been done before, but Speer almost seems to try a little bit too hard to change everything.
Angel City is Los Angeles (which literally means in Spanish ‘The Angels’) And it is truly the main problem with Immortal City. Speer spends so much time detailing a city that the world already knows. An editor could have axed a fifth of the novel by simply stating, “in a city that was once Los Angeles…” Instead I stumbled through detailed glimpses of one of the worlds most famous cities, and still left not really knowing what I was looking at. Speer has a talent for writing a lot of words, but not really saying much. This is something that Adult novels and movie scripts get away with on a regular basis. They paint you a nice picture without telling you what you’re really looking at. In my opinion it makes for a tedious read. There were a lot of little things I liked about Immortal City, the build up of Maddy and Jacks’ relationship (though it seemed to go from mere ‘hey maybe I like you’ to ‘hey I want to jump you’ in about ten seconds) I liked that she was the anti-celebrity (or, in this case, ‘angels’) but too much of Speers book seemed to be contrived. Like he fancied himself to be introducing everyone to how Hollywood works. Where people who read a lot, which are the people that are probably drawn to reviews like this, usually find themselves reading magazine covers in grocery stores, or hanging out at bookstores all day skimming cover jackets, and with everything that television does shove down our throats, people I think have a pretty good idea of how Hollywood works. I don’t need Speers to ‘fill me in’ I want him to tell me the story of how a Guardian Angel fell in love with a girl, I don’t want him to explain the intricacies of fame and fortune. I have the L.A. Candy series to do that. Guys, I don’t know. Maybe if Jacks had been a little bit more bad A, instead of a pretty boy who wore ‘YSL’ shoes. Maybe if Maddy hadn’t been so atypical (she thinks she plain, he thinks she’s something out a Shakespeare sonnet) maybe if Speer had kept to directing movies (because this would be a beautiful movie) instead of writing books, then maybe I would have liked it a little bit more. I don’t know, maybe I expected too much out of it. If you’re looking for a novel that involves a strong angel hating girl, and very good looking angel I recommend Angelfall by Susan Ee (seriously, read it. It’s bad A.) If you’re looking for a series on the ins and outs of fame in Los Angeles read anything by Lauren Conrad. If you’re looking for a really weird combination of the two and then add to them what felt like a cross between the aforementioned Foster the People song and A Cinderella Story (remember that movie with Hilary Duff and Chad Michael Murray?) then Immortal City is totally for you. 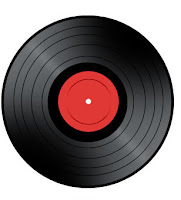