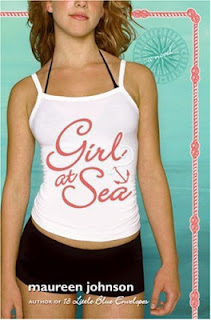 Author: Maureen Johnson
Series: Stand Alone
Genres: Realistic, Travel, Contemporary, Young Adult
Publisher: Harper Teen
Released: 17 May 2007
Summary: via goodreads.com Sometimes you have to get lost . . . The Girl: Clio Ford, seventeen, wants to spend the summer smooching her art-store crush, not stuck on a boat in the Mediterranean. At least she'll get a killer tan. The Mission: Survive her father's crazy antics. Oh, and also find some missing underwater treasure that could unlock the secrets of civilization. The Crew: Dad's wacky best friend Martin, his bizarre research partner Julia, her voluptuous daughter Elsa . . . and then there's Aidan, Julia's incredibly attractive, incredibly arrogant assistant. What's going on behind Aidan's intellectual, intensely green eyes, anyway? As Clio sails into uncharted territory she unveils secrets that have the power to change history. But her most surprising discovery is that there's something deeper and more cryptic than the sea—her own heart. . . . to find what you're looking for
My Review: Girl at Sea by Maureen Johnson was by my definition an incredibly fun summer read. The way that Clio’s dysfunctional family reacts to things to circumstances that they are put into, is incredibly hilarious. Also, the wonderful picture that Johnson paints of Clio’s past makes things so much fun.
What I really love about Johnson’s writing style is that she can take something so simple and turn it into something magnetic. Even more than that Johnson has her finger on the pulse of “teen speak” she reminds me a lot of John Green and John Hughes in that everything her characters say sound real in a way that you wish you thought that quickly on your feet.
Johnson also has a way of making you root for every character. Her characters are multi-dimensional and all have their own motivations. The pain that Clio goes through in the novel romantically almost breaks your heart and takes you right back to that initial high school heartbreak.
I also loved Clio’s strength. Not only with her friends but also with her family. She does a lot of things that are, at time, erratic, but are what girls, I think, would like to have the guts to do (I’m talking the jellyfish scene). Honestly, how can you go wrong when a book is taking place in the summer on a yacht in the Mediterranean with a crew that is looking for buried treasure? The Name of the Star is still my favorite of Maureen Johnson’s books, but Girl at Sea is definitely one that you can find some fun in.