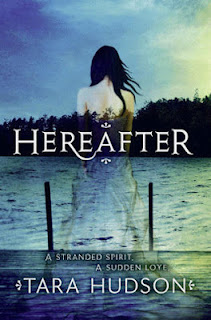 Author: Tara Hudson
Series: Hereafter # 1
Genres: Paranormal, Ghost Story, Young Adult, Romance
Publisher: HarperCollins
Released: 7 June 2011
Summary: via goodreads.com Can there truly be love after death? Drifting in the dark waters of a mysterious river, the only thing Amelia knows for sure is that she's dead. With no recollection of her past life--or her actual death--she's trapped alone in a nightmarish existence. All of this changes when she tries to rescue a boy, Joshua, from drowning in her river. As a ghost, she can do nothing but "will" him to live. Yet in an unforgettable moment of connection, she helps him survive. Amelia and Joshua grow ever closer as they begin to uncover the strange circumstances of her death and the secrets of the dark river that held her captive for so long. But even while they struggle to keep their bond hidden from the living world, a frightening spirit named Eli is doing everything in his power to destroy their newfound happiness and drag Amelia back into the ghost world . . . forever. Thrilling and evocative, with moments of pure pleasure, "Hereafter" is a sensation you won't want to miss.
My Review: Hereafter was definitely one of those books that I liked, but it didn’t necessarily stick with me. Amelia is such a lovable ghost. She is sweet and fun and I really enjoyed her voice in the novel. The same can be said for Joshua, he accepts all of the things that are happening to him with ease, and you can really feel that his love for Amelia goes beyond simply lust. I think those were my favorite things about this novel though. The ghost story is a little bit dated, like I had seen it somewhere on television, or I had read it somewhere before.
There was just something about Hereafter that made me keep saying to myself, “oh, well that’s typical” like there was a checklist of things that belonged in a ghost-story and the author went through and checked everything off that list and then sent it off to her editor. It wasn’t that there was anything bad about this book. There wasn’t. It was well written, and pretty light material. There were definitely some tense moments where you wonder what will happen next, but in the end I definitely felt like it was more typical than most, it didn’t really exceed any expectations that I had for a story about a ghost and a boy falling in love, but it did meet them.