The Alchemy of Forever 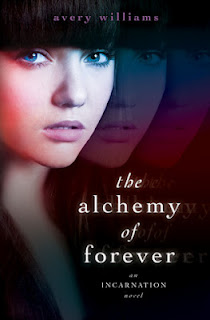 Author: Avery Williams
Series: Incarnation # 1
Genres: Fantasy, Paranormal, Romance, Young Adult
Publisher: Simon and Schuster Books for Young Readers
Released: 3 January 2012
Summary: via goodreads.com Seraphina has been alive since the 1300's, made immortal when the boy she was beginning to love back then, Cyrus, saved her from death with a strange liquid - a method of alchemy that lets them swap bodies with any human being. But now, in modern day America, Sera has decided that she can no longer bear the weight of stealing people's lives so she can keep living on. So she decides to run away from Cyrus and end her stolen existence once and for all. Her plan goes awry when she accidentally takes the body of a dying teenager and feels forced to take over her life. When the lines between Sera and Kailey's identity begin to blur, Sera finds a reason to desire to live once more. But she can't shake the guilt of having taken Kailey's life, even if she was dying. And what if Cyrus finds her?
My Review: The Alchemy of Forever reminded of a firework, in that at the beginning it was really enticing and exciting and fun with an initial boom and really grabs you, but slowly things fizzed out and by the end I was asking myself why I had bothered finishing. Because of the pacing I felt that Alchemy fell into the category of “novella” as opposed to a bonafide novel. I felt that things were pretty stop and go from the beginning, and it also relies heavily on fads, specifically ‘Words with Friends’. I have a really hard time when novels rely on fads because it automatically dates them. As a matter of fact the only novel I’ve been able to accept a fad in has been Flat Out Love. Which worked because of the characters.
For some reason I couldn’t really get behind any of the characters in Alchemy. For someone who has been around for a couple hundred years I felt like Seraphina should have been a little stronger and a little less stupid. I mean, if she is so set on dying than why is she afraid of Cyrus in the first place? Because it really didn’t make sense to me in that respect it made it hard for the novel to make sense.
I don’t know, Alchemy just felt really cookie cutter to me, I didn’t really understand the point of the novel, I realize that books especially ya books are meant to be entertaining, but I have a hard time when they don’t make any sense, as in the point of them doesn’t really make sense. I left this one asking more questions about than feeling like I had any answers. I understand that with a series there should be some questions left behind, but with Alchemy I felt like I had asked too many questions throughout the novel to make it worth seeing how it ends.