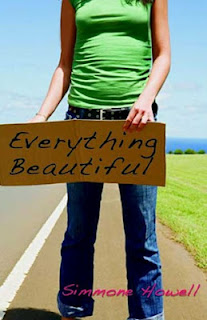 Author: Simmone Howell
Series: Stand Alone
Genres: Contemporary, Realistic, Young Adult
Publisher: Bloomsbury USA
Released: 28 October 2008
Summary: via goodreads.com Riley Rose, atheist and bad girl, has been tricked into attending Spirit Ranch, a Christian camp. There she meets Dylan Kier, alumni camper and recent paraplegic, who arrives with a chip on his shoulder and a determination to perfect all of his bad habits. United in their personal suffering and in their irritation at their fellow campers, they turn the camp inside out as they question the meaning of belief systems, test their faith in each other, and ultimately settle a debate of the heart.
My Review: Everything Beautiful was one of those books were I kept waiting for something really big to happen. It had a really interesting premise, a girl who believes herself to be an Atheist sent to Christian camp for a week, but what I had a hard time with was: why is she making such a big deal out of this? They don't treat her badly at the Christian camp, as a matter of fact a few of the girls are really nice to her in the beginning, and yet she still does everything that she can to beat against it. Why, Riley Rose, why? I mean, I understand that things aren't going the way that she expects them to, but seriously, the way that she handles somethings in the book made me embarrassed for her.
Not everything about this novel was bad though, Howell paints a lovely picture of the Australian outback for us, and gives readers and insight to some of the kids that end up at these Christian camps. I felt like the characters were wide and exciting and lovely, especially Olive and Bird. Dylan was a little heavy handed for me, and the way that the relationship between Riley and Dylan develops was a little hard for me to follow at times. It felt like one minute they hated each other and then suddenly they were running away together. A little bit strange. The only other honest complaint that I have is this: as far as a “YA” book goes this one really pushed the boundaries for me. Even without the F bombs, there was a lot of stuff discussed quite bluntly by Riley that I really had a hard time with. There were so many times where I would read a passage and think: “wait, did that really just come out of her mouth?” yes, yes it did.
I have to admit, this definitely gave me a different perspective on Australian kids today, maybe a little more shocking than I first thought. I swear I didn't graduate from high school that long ago, but books like Everything Beautiful make me feel like I was one of the most sheltered high school students on the planet (and maybe I was). But the “reality” of this novel was just a little too hard for me to grasp to make it truly memorable.